Transmission gratings have specialized uses in spectrometry. Any optical imaging system, such as a camera or telescope, can be converted into a spectrograph by placing a transmission grating in the system, typically in front of the objective lens. Transmission gratings also serve as convenient beamsplitters for monochromatic light sources such as lasers. The efficiency behavior of transmission gratings is simpler than that for reflection gratings, since no metals are present to introduce complicated electromagnetic effects and since the angles of diffraction are usually small. Thus, polarization effects are virtually absent. 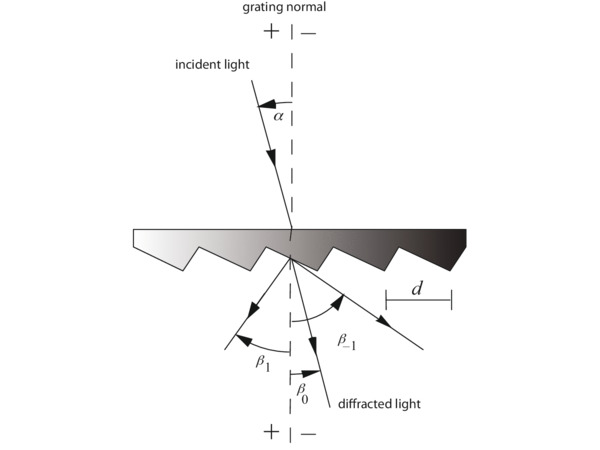 Plane transmission gratings are listed in order of groove frequency. Blaze wavelengths listed are for the first-order Littrow configuration. The maximum ruled area is groove length x ruled width. Click on a Master Grating Code (last 4 digits of a grating's part number) below to view master grating efficiency curves. Use the request a quote to get a quote based on your requirements. For additional diffraction grating options and custom capabilities, please see the Features section.

Light incident on a transmission grating is often normal to the back surface of the grating (α = 0; see Fig. 1), in which case the familiar grating equation reduces to

Here m is the (integral) diffraction order (usually |m| = 2), λ is the wavelength, d the groove spacing and β the angle of diffraction (measured from the normal). 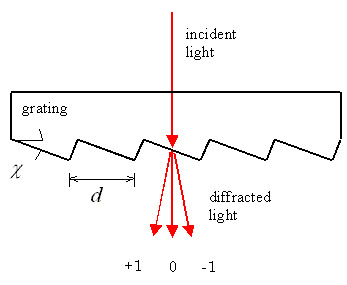 Transmission grating in use. The incident light is usually normal to the grating surface and strikes the back of the grating. Only three spectral orders are shown. 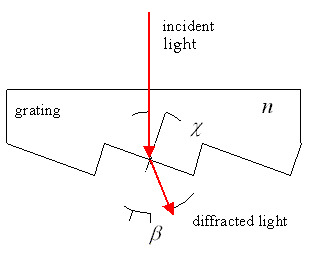 Applying Snell's law to the interface between the groove facet and air,

Combining this relation with the grating equation, yields the relationship between the blaze angle βB and the groove angle χ:

A corollary to this approximation is that, for n ≈ 1.6, the grooves of a transmission grating are about 10/3 times as deep as those of the corresponding reflection grating. For small diffraction angles (i.e., diffraction near the normal), this ratio holds for the angle χ as well.

The choice of groove angle for transmission gratings is limited by total internal reflection effects:

For n ≈ 1.6, this yields about 40° as the upper limit on χ, though in many cases the effective limit is somewhat lower. This means that transmission gratings cannot be used for high-dispersion applications.

The shape of an ideal efficiency curve for a blazed transmission grating is the same as for a reflection grating in the scalar region (χ < 8°). Peak efficiency occurs at

very little light will go into the negative first order or higher orders.

When the angle between two divided beams is small, transmission gratings serve as ideal beamsplitting elements. Most of the transmitted light will be in the zero and first diffracted order when the grating is used off-blaze, and the ratio of the zero order efficiency to the first order efficiency can be varied over a wide range. For three beams, a symmetrical groove profile is required.

All standard Richardson gratings have a part number according to the following format:

Newport is pleased to discuss special and unusual applications that are not addressed by our build to order catalog diffraction gratings. In some instances, none of the hundreds of master gratings we have in stock meet specifications, so a new master may be required. Please see Custom Diffraction Gratings for additional information on our capabilities.