An acronym for light detection and ranging, LIDAR is a remote sensing method that uses pulsed laser to measure ranges (variable distances) and generate precise, 3D data. The key component of a quality LIDAR system is the laser source transmitting the beam.

The accuracy and detail provided by LiDAR makes it an essential component of many applications that help local authorities and other land management organizations in their areas of responsibility. Below are examples of LiDAR applications that use MKS Spectra-Physics lasers.

Accurate terrain mapping is important for highway corridor planning and design, environmental impact assessment, and infrastructure asset management. LiDAR data can be used to create highly detailed digital city models and identify areas such as new buildings and extensions that were not previously captured on base maps. This can be critical for emergency services and building inspectors that need to have access to the most current information available. Figure 1 are examples of wide-area terrain and city mapping detected from airborne LiDAR. 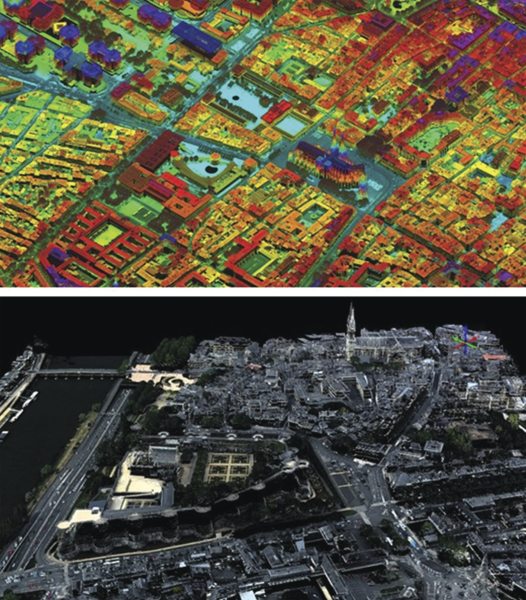 Accurate vegetation mapping is critical for natural resources management, forest inventory, ecological analysis, fire management planning, and conservation planning. LiDAR is unique in its ability to measure the vertical structure of forest canopies and individual tree crowns. Figure 2 shows vegetation mapping detected from airborne LiDAR. The data was acquired with a dual channel instrument employing 1064 nm and 532 nm lasers concurrently. By combining the calibrated reflectance values from the respective channels, the determination of additional attributes like tree species or natural versus man-made objects is supported.

Airborne LiDAR is a proven technology for providing accurate elevation models for transmission lines, allowing utilities to measure the shape of the ground below the transmission line, the position of the towers and poles, the sag on the wires, and the up-growth of any vegetation or other types of incursions. Figure 3 shows an example of power lines detected from airborne LiDAR.

Airborne LiDAR bathymetry has proven to be an efficient tool to monitor coastal environments. Important benefits of this technology are the ability to survey seamlessly across the land-sea boundary and to map extremely shallow areas with complex and irregular topography. An example of coastal mapping detected from airborne LiDAR is shown in Figure 4. 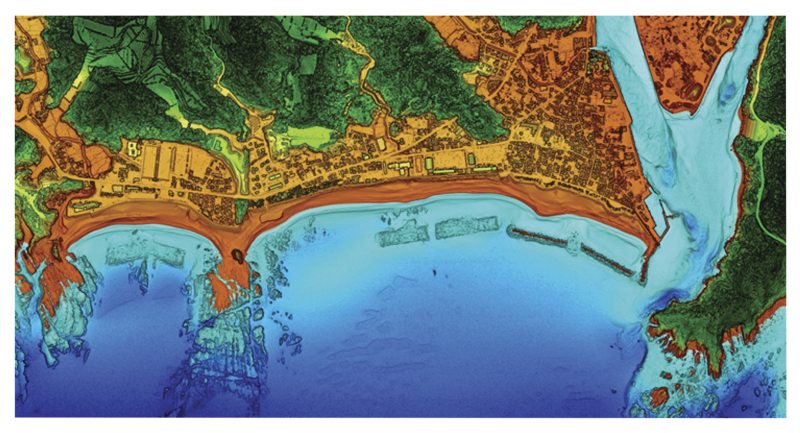 The discoveries in the jungles of Central America that were made possible through novel LiDAR 3D terrain mapping tools revealed a huge number of Mayan structures buried deep beneath the jungle of Guatemala's Peten region. In addition to hundreds of previously unknown structures, the LiDAR images show raised highways connecting urban centers and quarries. Complex irrigation and terracing systems supported intensive agriculture capable of feeding masses of workers who dramatically reshaped the landscape. This discovery suggests that this 1200-year-old civilization was more advanced than previously imagined and was comparable to sophisticated cultures such as those in ancient Greece or China.

LiDAR is a rapidly growing technology that continues to advance in terms of power, accuracy, and speed. Such advancements should result in new application spaces for LiDAR technology. For example, reducing the cost-per-point through higher effective pulse rates is the best way to address large-area, high-point-density projects in the future. Most recent developments in LiDAR technology aim at increasing the pulse repetition rate either for a single scanner or by operating two scanners simultaneously. MKS Spectra-Physics lasers currently offer state-of-the-art performance with up to 2 MHz pulse repetition rates, while next generation LiDAR will require even higher repetition rate capabilities.