There are two fundamental types of grating masters, ruled and holographic. Each can be manufactured on a flat (plane) or concave substrate. Each type of grating has its own advantages.

Ruled Gratings can be blazed for specific wavelengths and generally have high efficiency. These gratings are often used in systems requiring high resolution.

Holographic Gratings will often have lower scatter since they are generated optically. These gratings can be designed to minimize aberrations and can have high efficiency in a single plane of polarization.

Designed for first order Littrow use, Our Plane Ruled Diffraction Gratings are blazed for specific wavelengths and generally have high efficiency at those wavelengths. The groove spacing and blaze angle determine the distribution of energy. In Littrow use, light is diffracted from the grating back toward the source. Gratings used in the Littrow configuration have the advantage of maximum efficiency (or blaze) at specific wavelengths. Ruled gratings comprise the majority of diffraction gratings used in spectroscopic instrumentation. Typically used in systems with collimated, incident light, plane ruled gratings require auxiliary optics, such as lenses or mirrors, to collect and focus the energy. Ruled gratings are especially useful in systems requiring high resolution. At Richardson Gratings, we have three ruling engines in full-time operation, each producing high-quality master gratings each year. These ruling engines provide gratings with triangular groove profiles, very low Rowland ghosts, and high resolving power. Mechanically ruled, individual grooves are burnished with a diamond tool against a thin coating of evaporated metal. Utilizing a high fidelity cast replication process, developed and enhanced through years of research and manufacturing experience, we have the ability to provide duplicates of master gratings that equal the quality and performance of the master grating.

Generated optically, our Plane Holographic Reflection Gratings generally do not display periodic errors or ghosts often found in ruled gratings. They typically have a sinusoidal groove profile and are generated by the recording of an interference pattern onto a photoresist-coated substrate. Holographic gratings can provide excellent wavefront flatness and high efficiency in a single plane of polarization. Like their ruled counterparts, holographic gratings are most effective when used in the Littrow configuration. Richardson Gratings offers a wide selection of holographic gratings with varying modulation depths (the ratio of groove depth to groove spacing). The lower the modulation, the shorter the wavelength limit to which the grating can be used, but the peak efficiency may be lowered as well. We have found that three modulation levels (high, medium, and low) are adequate for nearly all purposes. Since the grooves are symmetrical, they do not have a preferred blaze direction and hence, the gratings carry no blaze arrows.

Unlike conventional ruled gratings, Echelle Gratings are coarse, high-blaze angle gratings used in high diffraction orders. The virtue of an echelle lies in its high efficiency and low polarization effects over large spectral intervals. Providing very high dispersion and resolution, echelles enable compact system design. They are often used in or near Littrow configuration, in which the angle of incidence equals the angle of diffraction. Overlapping of diffraction orders is an important limitation of echelle gratings. Some type of order separation is essential, with cross-dispersion provided by another grating or a prism. The combination of grating and dispersing element leads to the ability to focus an image on a flat plane compatible with CCD or CID detectors. Common applications include atomic absorption spectroscopy, laser tuning, and astronomy. Since they operate in many diffraction orders, echelles are capable of wide wavelength coverage, being used from 100 nm into the infrared. Our echelle gratings have been used in several space spectrographs, including the Hubble Space Telescope. Richardson's echelle gratings are subjected to careful testing. Resolution close to the theoretical limit can be verified by interferometric and Foucault wavefront tests, and also by observation of the hyperfine spectra of mercury. Efficiency is determined with mercury and laser light sources to ensure narrow spectral line widths. 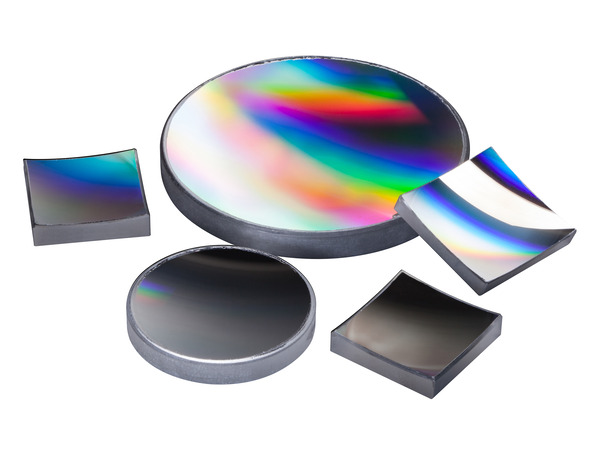 Concave holographic gratings function as both a dispersing and focusing element for monochromators. These gratings contain two focusing elements: the substrate, and the groove curvature. As a result, an instrument designer can replace a lens system by using concave gratings, leading to a reduction of optics in a system, and thus, cost. Another advantage of a system based on concave gratings is decreased optical aberrations such as coma and astigmatism.

Concave ruled gratings are usually blazed as a natural consequence of the ruling process. They operate with higher ƒ/numbers and usually offer higher diffraction efficiencies. They are typically used in Rowland Circle Spectrographs.

Transmission gratings can also be replicated onto the face of a prism to form GRISM, which produces a straight-through spectrum, undeviated at one central wavelength. In such cases the groove angle is often chosen to be approximately equal to the prism angle.