2PF microscopy has enabled impressive progress in the fields of neuroscience, embryology, and oncology. Researchers can visualize tissue morphology at a cellular level within scattering tissue even in vivo. The imaging depth of Two-Photon Fluorescence Microscopy is limited by scattering to about 1 mm and there is a desire to image deeper into samples, particularly in neuroscience such as in studies of subcortical structures in the mouse brain.

Figure 1. A comparison of images from 2PF (left, at 920 nm) and 3PF (right, at 1300 nm) microscopy of fluorescein-labeled blood vessels 650 µm deep in a mouse cerebellum. The two images have comparable signal strength and were displayed with the same contrast setting. Scale bar, 50 µm. Images reprinted with permission from, SPIE Publications.
Moving to longer wavelength excitation is important to reduce scatter. Figure 2 shows how the calculated penetration depth due to Mie scattering in brain tissue increases with wavelength. Mie scattering dominates when particles are larger than the incident wavelength. The same figure shows the penetration depth due to water absorption with strong absorption bands at 1.4 µm and 1.9 µm. The combination of the scattering and absorption gives an effective penetration depth. The optimal wavelengths to minimize both the scatter and the absorption are thus at 1.3 µm and 1.7 µm. 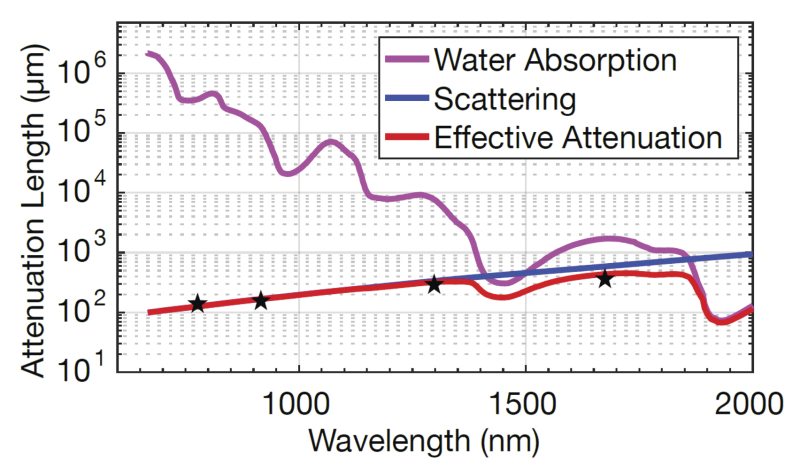 Figure 2. Effective penetration depth due to scattering and absorption in imaging where the optimal excitation wavelengths of 1.3 µm and 1.7 µm are shown (reprinted with permission from, The Optical Society).
Currently, there are not many fluorescent dyes where the two-photon excitation wavelength overlaps with these optimal wavelengths. However, there are dyes with a spectral overlap of their three-photon absorption in these low loss windows. Some of these dyes are the same as those used for 2PF microscopy at 900 nm, e.g., green fluorescent protein (GFP) based probes, and 1100 nm, e.g. red fluorescent protein (RFP) based probes. Over the last decade, commercial manufacturers have improved the transmission of their microscopes for longer wavelength excitation.

One remaining challenge is that the cross-section (or the probability of excitation) for 3PF is several orders of magnitude smaller than for 2PF, requiring lasers with much higher peak powers for efficient excitation. However, to prevent damage at the surface of samples, the average power must be limited. Thus, to achieve the required peak powers, laser systems that produce 100 fs pulses with higher energy but with lower repetition rates (to maintain modest average power) are required. A typical laser for 3PF microscopy produces 100 fs pulses every 1 µs (a repetition rate of 1 MHz). Therefore, 1 W of average power gives a peak power of 10 MW with the laser on only 0.00001% of the time. Laser systems that produce ultrashort pulses at this high energy are based on ultrafast amplifier systems that operate at a wavelength of 1 µm. To shift the wavelength to the target wavelengths of 1.3 µm and 1.7 µm, additional nonlinear conversion schemes are required including SHG and OPG.

In THG microscopy, the fluorescent dye is omitted and the third harmonic signal is generated from the sample itself. In a homogenous sample, the THG signal from above the focus cancels the signal generated below the focus due to phase matching. Thus, a third harmonic signal is only generated when the focus is close to a gradient in the refractive index. As a result, THG microscopy is particularly well-suited for 3D label-free imaging of transparent specimens where the membrane or other interface is of interest.

When a combination of techniques is utilized to interrogate a single sample, it is referred to as multi-modal imaging. Using multiple techniques allows investigators to look at different features in the same sample as illustrated in Figure 3, which shows a 3D reconstruction of a mouse brain cerebellum. Fs pulses at 1.3 µm are used to excite the tissue, which generates 3PF in fluorescein-labeled blood vessels while the same wavelength also produces a THG signal in different portions of the cerebellum, i.e., myelinate fibers. 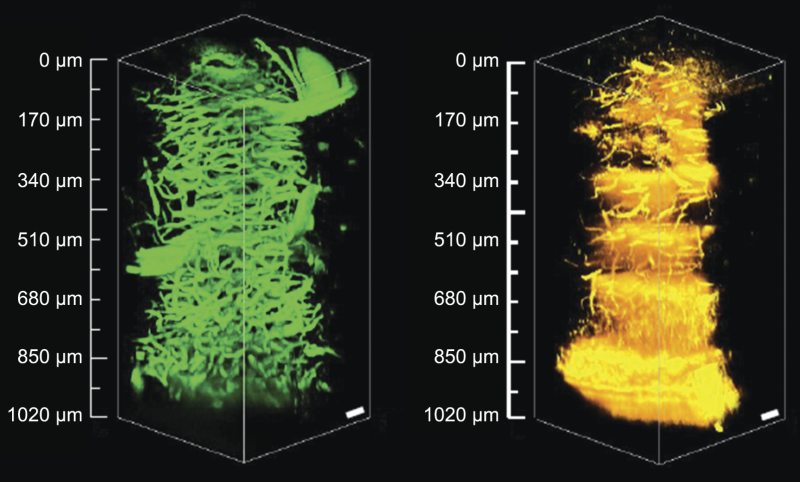 Figure 3. 3D images from a mouse brain cerebellum extending 1 mm deep into the tissue acquired via 3PF (left) and THG (right) microscopy at 1.3 µm. Scale bar, 50 µm. Images reprinted with permission from, SPIE Publications.
The MKS Spectra-Physics Spirit® fs laser is an all-in-one amplifier which delivers high average powers (up to 100 W), at a fixed wavelength of 1040 nm, and with a pulse duration of 400 fs. This pulse duration is longer than the Spectra-Physics InSight laser, but the reduced pulse repetition rate (0.1 to 1 MHz) allows for higher pulse energies (up to 40 µJ). These specifications open the door for new applications such as a direct source for certain biological applications or as a pump for other lasers, like the Spectra-Physics Spirit-NOPA-IR. Other applications for the Spirit laser include materials processing, medical device fabrication, microsurgery, time-resolved fs spectroscopy, strengthened glass and sapphire cutting.

The MKS Spectra-Physics Spirit-NOPA-VISIR is a family of automated non-collinear optical parametric amplifiers (NOPA) specifically built and optimized for the Spectra-Physics Spirit® and Spirit® One™ pump lasers. This combination creates a powerful, user-friendly, tunable, high repetition rate source of ultrashort pulses for in vivo, deep-tissue imaging in neuroscience, spectroscopy, and other ultrafast scientific applications. The Spirit-NOPA-VISIR laser provides an ideal platform for 3PF microscopy as it produces microjoule pulses at both 1.3 µm and 1.7 µm.