Investigation of the molecular properties of complex systems such as living cells is a topic of wide interest. Researchers need spatial resolution to focus on the object of interest and chemical selectivity to probe specific species. The combination of optical spectroscopy and microscopy provides a direct and non-invasive approach to visualizing nucleic acids, proteins, and other molecules at work in living cells.

Raman microscopy is a technique that enables label-free chemical imaging. It is based on the Raman scattering effect of molecules that was discovered by C.V. Raman in the early 1930s. When light with a particular wavelength or photon energy is incident on a molecule, it can be inelastically scattered. This means that part of the energy is absorbed by the molecule and the scattered photon has a lower energy than the incident photon (see Figure 1). The fraction of the energy absorbed depends on the vibrational frequencies of the molecule. All molecules have specific Raman frequencies, typically given in wavenumbers, which span from 100 cm-1 to 3500 cm-1. A molecule's Raman spectrum is highly dependent on its chemical structure but mostly unaffected by the local environment. Therefore, Raman spectroscopy is not only specific but also robust to environmental variability.

Figure 1. Energy diagrams of Raman interactions: Spontaneous Raman (SR), SRS, and CARS.
Three types of Raman processes are shown in Figure 1. In SR scattering, the pump field is inelastically scattered off molecular vibrations of the sample, generating a new red-shifted field component, called the Stokes wave. SR scattering is typically very weak and, as a result, imaging based on the SR effect is extremely slow due to long acquisition times necessary to provide images with reasonable SNR. In SRS, both the pump and Stokes frequencies are incident on the sample. If the frequency difference matches a molecular vibration of the sample, stimulated excitation of the vibrational transition occurs. SRS-based microscopy is a relatively recent development having been demonstrated in 2008 and gaining commercial viability only in recent years. CARS is a four-wave mixing process that generates a new blue-shifted field, called the anti-Stokes wave. When the energy difference matches a molecular vibration of the sample, the scattering process is coherently amplified. The CARS process itself was first studied by researchers at the Ford Motor company in 1965. Multiphoton vibrational microscopy based on CARS has been investigated since the early 2000's.

In CARS microscopy, the pump and Stokes beams are tightly focused into the sample and a CARS image is generated by scanning either the sample or the laser beams. Besides possessing the same 3D sectioning capability afforded to 2PF and 3PF microscopy, CARS microscopy offers several advantages. CARS microscopy permits non-destructive molecular imaging without any labeling. This advantage is important for imaging small molecules such as lipids where labeling may significantly affect their molecular properties. The coherent amplification from the molecular oscillators results in a highly directional output, which greatly facilitates signal collection. A comparison between images of a polymeric structure taken by CARS and SR microscopy is shown in Figure 2. The CARS image possesses higher fidelity despite an acquisition time (under comparable laser power) two orders-of-magnitude shorter than for the SR image. Finally, CARS signals appear at a wavelength that is shorter than the excitation wavelengths; therefore, spectrally-separating it from the one-photon fluorescence background is straightforward.

Figure 2. Imaging of a hexagonal polymeric structure by CARS microscopy (left) and SR microscopy (middle) with similar average laser powers. Acquisition of the CARS image was performed in one second while the SR image took five hours. Scanning electron micrograph of the hexagonal polymeric structure (right).
CARS microscopy requires a high peak power source similar to those required by 2PF microscopy. However, a CARS measurement, unlike 2PF, is not background-free. The non-resonant background limits the image contrast and spectral selectivity and much work has concentrated on methods to overcome this background. SRS imaging is largely free from the non-resonant background inherent in CARS. Nonetheless, there are still nonlinear processes such as two-photon absorption, excited state absorption, and thermal lensing that can impact the SRS signal. Not only is the SNR improved in SRS, the Raman spectral fidelity is also preserved. Furthermore, because the SRS signal has a linear dependence on concentration, it has the potential to be a powerful method for label-free quantitative determination of chemical concentration of individual species in a multi-component system. These qualities make SRS microscopy a straightforward method for image interpretation and quantification.

Figure 3. The impact of using different laser pulses to excite Raman transitions for CARS and SRS microscopy. The difference in laser frequencies (Ω = ωP- ωS) shows efficient overlap with the width of the Raman transition (grey region) for ps pulses but not for fs pulses. Alternatively, the use of chirped fs pulses allows for good spectral overlap using ultrafast pulses.
While 100 fs pulses provide the high peak power needed for a strong signal from CARS or SRS, the corresponding bandwidth of these pulses is about 10 nm, which is much broader than the width of most Raman lines. This is illustrated in Figure 3. Accordingly, a large portion of the pulse energy only contributes to the generation of the non-resonant background. The line width of the Raman transition is better matched by ps pulses (see Figure 3) and much work has been done with ps lasers or OPOs.

A clever solution called spectral focusing allows the full bandwidth of a fs pulse to be used efficiently for these nonlinear microscopy techniques. In this method, both the pump (ωP) and Stokes (ωS) pulses are linearly chirped as shown in Figure 3. Optical pulses where the frequency increases or decreases within the temporal pulse are referred to as chirped, in analogy with sound pulses. Therefore, in the plots shown in Figure 3, a horizontal line represents a pulse that is not chirped and the vertical width of the line represents the bandwidth of the pulse. Conversely, a tilted line indicates a linearly chirped pulse. When both the pump and the Stokes pulses are linearly chirped by the same amount, the difference between the two frequencies (Ω = ωP- ωS) can be quite narrow. Thus, two broadband fs pulses can still be used to efficiently excite a narrowband Raman line. Tuning of the frequency difference between the pulses is also possible using this technique. This is accomplished not by tuning the central wavelength of the laser but rather by changing the relative timing between the two chirped pulses. Spectral focusing allows fs lasers to be used for all nonlinear microscopy techniques including CARS and SRS.

In SFG microscopy, the fluorescent dye is omitted and the sum frequency signal is generated from the sample itself, similar to both SHG and THG microscopy. However, in contrast to these techniques where only a single wavelength is required, two different wavelengths are required for SFG. Consequently, this technique has similar requirements to CARS in that the pulses from the two lasers must arrive at the same location in the sample at the same time. Therefore, synchronized lasers are needed for SFG microscopy. 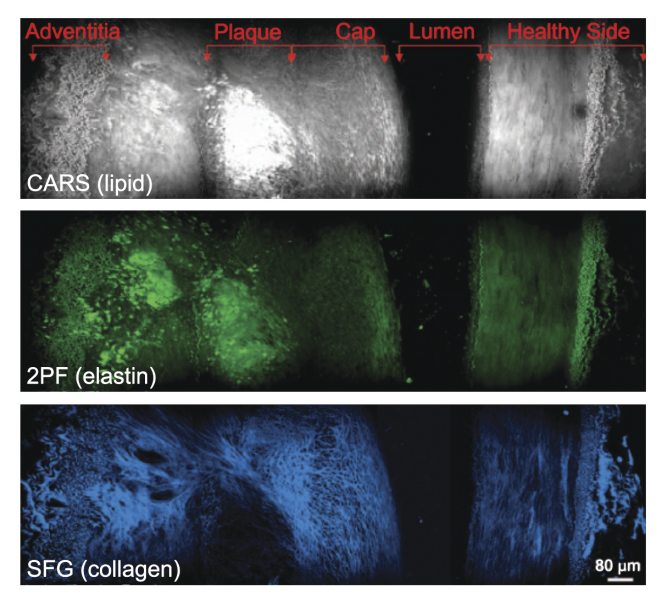 Figure 4. Cross-sectional view of an atherosclerotic plaque demonstrating multi-modal imaging.
An interesting application of multi-modal imaging is shown in Figure 4 where atherosclerotic plaque in an iliac artery was studied in using three different modalities: CARS, 2PF, and SFG. All three techniques work without labels and the sample was studied in vivo. The plaque shows up in the CARS image due to the strong signal from lipid bodies that are enriched in C-H bonds. The 2PF image (endogenous fluorophores generate two-photon excitation fluorescence or TPEF) also shows the lipid core while the SFG image reveals a lack of collagen fibrils in the same region.

The MKS Spectra-Physics InSight® X3™ laser, when equipped with the fixed 1045 nm dual beam option, can fully support the diverse needs of multimodal imaging. The two synchronized output beams, one tunable and one at the fixed wavelength, enable simultaneous imaging of various fluorescent proteins (for example GFP and mCherry) and genetically encoded calcium indicators (GCaMP6 and jRGECO1a), SHG/THG imaging, and advanced imaging techniques such as CARS and SRS. 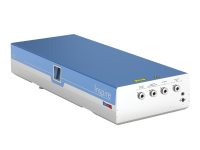 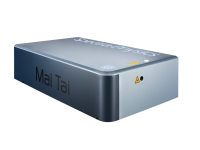 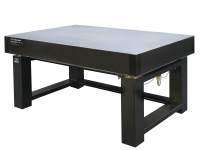