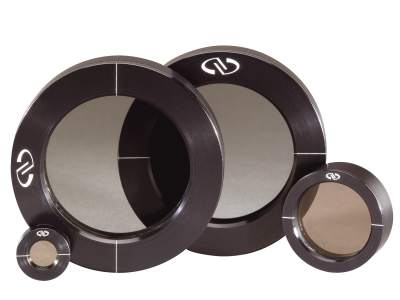 A polarizer is an optical component that is designed to filter, modify or analyze the polarization states of light. Polarizers can be integrated into optical systems to increase contrast, decrease glare or to measure changes in temperature, magnetic fields or gauge chemical reactions.

There are three kinds of polarizations, depending on how the electric field is oriented:

Linear polarization – where the light’s electric field is confined to a single plane along the propagation direction.

Circular Polarization – where the electric field of light is made up of two linear components perpendicular to one another, of the same amplitude, but with a phase difference of π/2. The electric field that results will rotate in a circle about the propagation direction and, depending on the rotation direction, is referred to as right- or left-hand circularly polarized light.

Elliptical Polarization – where light’s electric field describes an ellipse. This is caused by a combination of two linear components with different amplitudes or a phase difference that isn’t π/2. Elliptical polarization is the most common description of polarized light, while circular and linear polarized light can be looked at versions of elliptically polarized light.

Polarizer performance is commonly characterized by the following specifications:

k1: Principal transmittance or insertion loss is the transmission of linearly polarized incident light with the polarizer oriented for maximum transmission.

k2: Minor transmittance or blocking efficiency is the transmission of linearly polarized light with the polarizer oriented for minimum transmission.

Other performance characteristics that can be derived from the k1 and k2 values or directly measured are:

TT: Total transmittance, is the transmission of a single polarizer in unpolarized incident light = (k1 + k2) / 2

Degree of Polarization and Extinction Ratio

Linear polarizers exhibit polarizing properties that are usually defined by a degree of polarization efficiency (P) and its extinction ratio (ρp), which can vary with wavelength and incident angle.

Acceptance angle is the maximum deviation from the design incidence angle where the polarizer will still perform within its specifications. Angles of incidence of 0° or 45° or at Brewster’s angle is where most polarizers are optimally designed to work.

Precision linear polarizers are constructed by laminating a thin, stretched and dyed polymer polarizing film between two high-precision AR coated glass or fused silica windows. The polymer has been stretched and stressed in one direction to align the long polymer molecules to create a filtering effect, which allows light waves oscillating parallel to the direction of the stress to pass through, while blocking their polarization. The compact component that results is ideal for flux densities below 1 W/cm2. Polymer polarizers are used throughout the visible spectrum.

Superior high-energy polarizer performance is achieved through advanced coating design and meticulous production procedures. These optics have been developed for use in some of the most demanding lasers in the world. Some polarizer coatings have been optimized for use with Nd:YAG lasers. When these polarizers are mounted at Brewster’s angle, extinction ratios exceed 100:1. Thin film polarizers have also been optimized for ultrashort pulses. These thin film polarizers have been designed to provide superior performance in ultrafast Ti: Sapphire regenerative amplifiers. While pulse lengths are relatively long in these amplifiers, pulse dispersion is still a concern if pulse width is to be maintained in the recompressed pulse. Multiple round trips in the amplifier have a multiplying effect on the dispersive characteristics of any optic in the cavity. For this reason, substantial effort has been made in designing and testing these polarizers for minimum pulse dispersion.

Polarizing Cube Beamsplitters consist of a pair of precision right-angle prisms carefully optically contacted or cemented together to minimize wavefront distortion. A dielectric coating is placed onto the hypotenuse of one of the prisms. Polarizing beamsplitters are designed to split the light into two –reflected S-polarized and transmitted P-polarized beams. They can be used to split unpolarized light at a ratio of 50/50, as well as for polarization separation applications, including optical isolation.