Lasers are typically identified by their gain medium and are often classified by the radiating species that give rise to stimulated emission. These radiating species can include atoms and molecules in a dilute gas, organic molecules dissolved at relatively low concentration in liquid solutions, semiconductor materials, and dielectrics such as crystalline solids or glasses that are doped with a high concentration of ions. These laser categories are generally referred to as gas, liquid, semiconductor, and solid-state. As alluded to in Light-Matter Interactions in Lasers, the concentration of the radiating species plays a significant role in the formation of the medium’s energy levels. In turn, these energy levels will dictate the optical pumping transition, configuration for population inversion, laser emission wavelength, and gain bandwidth. While details regarding specific interactions leading to population inversion in these various laser media are discussed below, Figure 1 provides representative energy-level diagrams and population inversion processes for each laser type.

Lasing occurs in a wide variety of media with output characteristics that possess an even greater degree of variation. A list including all commercially-available systems as well as those specifically designed for targeted applications would easily fill up an entire book. For this section, the focus will be on the most common commercially-available lasers. Table 1 provides the names of these systems (based on their media) as well as their nominal characteristics and parameters. This table can be referred to during the subsequent discussions of the individual laser classes. 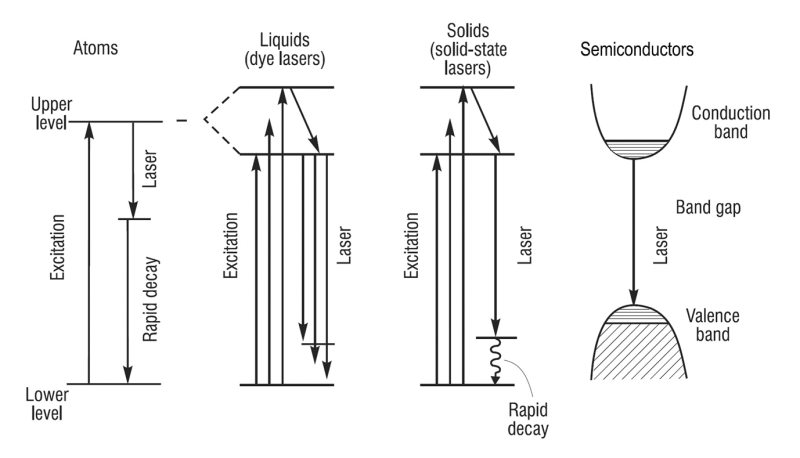 For gas lasers, population inversion is typically achieved by applying a voltage across a glass or ceramic tube that contains the gain medium which is either a low-pressure gas or gas mixture (see Figure 2). The voltage produces an electric field within the tube which induces an electrical current. These electrons collide with the gas atoms, thereby exciting them to higher energy levels that will serve as the upper laser level. The lower laser level typically decays to the ground state much faster than the upper level, thereby creating a population inversion between the two (see Figure 1). Since the radiating species are very dilute, the resulting laser transitions have very narrow spectral bandwidths and operate at well-defined wavelengths. Due to the wide variety of gaseous media, the range of operating wavelengths can vary from the UV for excimer lasers, through the visible (VIS) range for argon ion and HeNe lasers to the MIR range for CO2 lasers. Gas lasers have historically been deployed in a wide variety of applications but have been largely supplanted by DPSS lasers and laser diodes except for specialized applications. The exceptions to this trend are for CO2 and excimer lasers which still play significant roles in the laser processing and medical eye surgery markets.

Certain organic dye molecules can act as radiating species for lasing since they have sufficiently long lifetimes in their upper energy levels and can therefore radiate energy from that level instead of losing energy due to collisions. To ensure the proper concentration of radiating species are present, the dye molecules (typically in powder form) are dissolved in a solvent at a concentration of about one part in ten thousand. Due to this solution form, the system is known as a liquid dye laser. Dye lasers are optically pumped by either flashlamps or other lasers. Each dye molecule, due to its overlapping electronic/rotational/vibrational transitions, has a wide homogeneously broadened gain spectrum on the order of 30-50 nm. By utilizing many different dye molecules, the laser can be tuned over a wide spectrum in the UV, VIS, and near-infrared (NIR) (see Figure 2). Combining this broad gain bandwidth with a frequency-selective element allows wide tunability coupled with a narrow spectral bandwidth. As a result, the dye laser has traditionally been used for various spectroscopic applications. Dye lasers require significant maintenance due to the decomposition of the dye when dissolved in its solvent. Therefore, DPSS lasers coupled with nonlinear frequency conversion (see Spectral Tunability) have largely replaced dye lasers in many applications.

A semiconductor laser is often referred to as a laser diode since it operates like a diode with current flowing in the forward direction of the junction. By injecting charge carriers into the region of space defined by the junction, recombination radiation can occur. Provided this current injection is strong enough, a population inversion can be achieved and stimulated emission will occur. Due to the large refractive index difference between the semiconductor material and air, the semiconductor crystal surface can possess sufficient reflectivity to act as its own resonator cavity. These two characteristics, electrical pumping and compact laser design, coupled with the maturity of the semiconductor manufacturing process, has enabled laser diodes to gain a number of advantages over other types of lasers, including high power and efficiency, small size, as well as compatibility with electronic components. Unsurprisingly, they are one of the most important classes of lasers in use today, not only because of their use in applications such as optical data storage and optical fiber communication, but also because they serve as pumping sources for solid-state lasers.

The term solid-state laser refers to a laser whose gain medium consists of active ion species introduced as impurities in an optically transparent host material (typically crystals or glasses). As detailed in Light-Matter Interactions in Lasers and Required Components for Lasing, materials for laser operation should possess strong and spectrally-narrow transition cross-sections, strong absorption bands for pumping, and a long-lived metastable state. Ions that have optical transitions between states of inner, incomplete electron shells generally exhibit these characteristics. However, these ions must be protected or shielded from other ions to prevent loss of these desired characteristics. This is accomplished by incorporating the ions in a solid host material whose lattice allows for ion doping levels sufficient for a gain medium while simultaneously shielding the ions from one another. According to Required Components for Lasing, solid-state lasers achieve their population inversion through optical pumping, which can be accomplished by using a flashlamp or direct pumping from another laser source such as a laser diode or a DPSS system.

The host material for a solid-state gain medium must possess both unique microscopic lattice properties and appropriate macroscopic mechanical, thermal, and optical properties. These host materials can be organic matter, ceramics, crystals, and glasses but generally fall into the latter two categories. The most common crystal and glass solid-state host materials are given in Table 2. Crystal hosts have several benefits, including narrower laser linewidths, lower laser thresholds which allow for lower doping levels, and higher thermal conductivities. Compared to crystals, glass hosts have many distinct merits: they have lower melting temperatures and can therefore be fabricated at a lower cost and in larger dimensions, they possess high optical quality, and can be doped homogeneously at higher concentrations. However, they have much lower thermal conductivity than crystals and therefore are utilized mainly for systems that operate at high peak powers and low repetition rate. Line-broadening behavior in solid-state lasers is typically dictated by the host medium with crystalline hosts generating homogeneous broadening and glass hosts giving inhomogeneous broadening.

The majority of dopant ions used in solid-state laser media are transition-metal and lanthanide-metal (or rare-earth) ions. The most common transition-metals used are titanium (Ti) and chromium (Cr) while the lanthanides are neodymium (Nd), ytterbium (Yb), erbium (Er), thulium (Tm), and holmium (Ho). The dopant ions are generally dispersed throughout the host with a concentration (typically around one part in one hundred) depending on the dopant, host material, and application. These ions possess electrons that are surrounded by a “screen” (of electrons from the host material) that protect these electrons from interacting with neighboring dopant ions. Therefore, the ions can radiate their energy rather than decay by collisions similar to the way that organic dye molecules behave when in a liquid solvent. When these ions absorb light, the energy ends up in an excited energy level that serves as the upper laser level. By virtue of the screening provided by the host material, this upper level has a very long lifetime (the metastable level) before it radiatively decays. A population inversion can occur (see Figure 1) because the lower laser levels are being rapidly depopulated by collisions with the neighboring atoms as these levels are not protected the way the upper levels are.

There are many varieties of solid-state lasers due to the range of host materials available and the numerous dopant ions. Some of the more common solid-state lasers are listed in Figure 3 along with their gain bandwidths. Clearly, solid-state media can possess large gain bandwidths with the possibility of broad wavelength tunability or narrow gain bandwidths with very monochromatic linewidths. In addition to the laser wavelength span shown in Figure 3, solid-state lasers can be frequency- or wavelength-tuned using methods discussed in Spectral Tunability. Beyond this spectral agility, the variations in gain media enable systems to exhibit many different characteristics including very high output powers, lower powers with very good spatial beam quality, CW output with remarkable power stability, or ultrashort pulses with ps or fs durations. This flexibility enables solid-state lasers to be used in applications ranging from multiphoton microscopy to light detection and ranging (LIDAR) to material processing/marking/cutting and even laser fusion.

When a solid-state gain medium is fabricated into an optical fiber and a resonator is integrated, a fiber laser is formed. This class of lasers is usually treated separately from the “bulk” solid-state lasers discussed above due to the unique light-guiding properties of fibers, e.g., strong spatial confinement over long distances. A fiber laser is defined as a laser where the optical fiber is itself the gain medium which can be distinguished from having another type of laser or gain medium simply being coupled to an optical fiber. The laser-active ions are typically doped into the core of the optical fiber which is a glass host material. The most common dopant ions are the rare-earth elements of Yb, Er, and Tm whose laser gain bandwidths can be seen in Figure 3. Virtually all fiber lasers are optically pumped by laser diodes or other fiber lasers. In order to efficiently couple laser diodes with lower-quality spatial modes into the fibers, double-clad fibers are often implemented as shown in Figure 4. There are different ways to integrate a resonator into a fiber laser geometry, including simply coupling the light out of the fiber and reflecting it off a normal cavity mirror, forming a fiber loop mirror, or through the use of fiber Bragg gratings (FBGs) (see Figure 4) which can be fabricated directly in a fiber. Fiber lasers can achieve high output powers, operate in either pulsed or CW mode, generate high quality output beams, and can be operated over much of the NIR and MIR spectral region. This accounts for their use in a variety of applications including optical fiber communications, laser surgery, LIDAR and range-finding, and seeding of other more powerful lasers. Fiber lasers also dominate the high-power CW materials processing market. 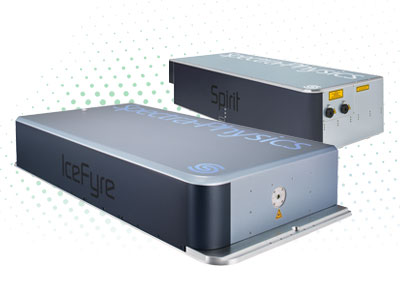 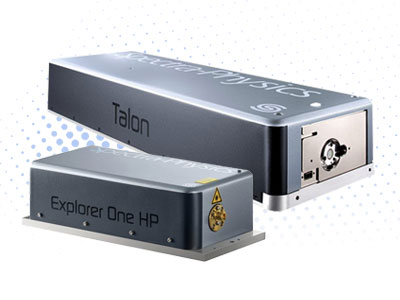 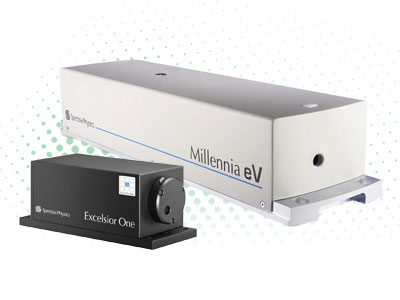