As depicted in Figure 1, available laser gain media enable emission wavelengths to span a large portion of the electromagnetic spectrum. Despite this spectral coverage, applications that require access to a range of laser wavelengths typically do not utilize multiple laser systems due to cost and integration issues. Such applications rely on the output wavelength of a single laser system to be tuned over a spectral range. This is accomplished in two different ways. The first way to perform laser wavelength tuning uses a wavelength-selective element to choose a specific portion under a gain bandwidth to lase. This allows for tuning and comparable output characteristics, e.g., laser bandwidth, collimation, polarization, throughout the tuning range. A drawback is that emission wavelengths are constrained to the spectral bandwidth of the laser gain medium. The second method of wavelength tuning involves nonlinear frequency conversion. This approach introduces a nonlinear optical (NLO) crystal either outside or inside the laser cavity to generate new wavelengths or frequencies. This method allows for the generation of coherent light in spectral regions that range outside the laser gain bandwidth and can even extend to regions inaccessible to any laser system. The drawbacks include the need for high intensities to produce efficient output and a more complicated tuning method.

Gain bandwidths for solid-state lasers can be very broad (see Figure 1). Introducing loss over a narrow and spectrally-adjustable region enables lasing to be restricted to a specific wavelength while also permitting tunability over the gain bandwidth. A number of methods can be utilized but all rely on reducing the optical losses at the desired wavelength. This can be accomplished by favoring the reflectivity of a specific wavelength off the end mirror in a resonator. The wavelength-dependent optical element can be a prism which refracts the light to the end mirror or a diffraction grating, which also functions as the end mirror (see Figure 2). Rotation of either the prism or grating selects the wavelength. Alternatively, optical transmission can be maximized to reduce losses at a desired wavelength. This wavelength-adjustable transmission can utilize an intracavity etalon or, more commonly a birefringent filter as shown in Figure 2. The filter consists of a single thin birefringent crystal (or several birefringent plates of increasing thickness) inclined at Brewster’s angle. The filter generates no reflection losses and therefore maximizes transmission for a specific wavelength based on the properties of the crystal and its angular orientation. Other wavelengths suffer losses at the filter and therefore are prevented from lasing. Wavelength tuning is achieved through rotation of the filter.

Figure 2. Laser tuning using the wavelength dispersive behavior of a diffraction grating or a prism (left). Use of a birefringent filter as a wavelength-selective element (right).

Nonlinear frequency conversion provides a means of extending the wavelength range of available laser sources. There are drawbacks to this approach, one of which is the requirement that the laser pump source must possess high intensity for efficient conversion. However, with the commercialization of high-power pulsed lasers, this requirement can now be readily met and nonlinear frequency conversion has become a viable approach for spectral tunability. Frequency conversion is an NLO phenomenon with the underlying light-matter interactions being quite complicated. Here, only a very basic description will be given of how an optical medium under intense optical fields can generate new frequencies.

When a weak optical field interacts with a material, it creates a polarization in the material made up of many electric dipoles. The strength of this polarization is linearly proportional to the magnitude of the optical field and the dipoles re-radiate light with the same frequency of the optical field. This is the regime of linear optics. When an intense optical field encounters a material, the polarization no longer responds linearly to the applied field. Instead, it becomes quadratically-dependent (or even higher order) on the field. This nonlinear dependence on the optical field is why intense light sources are required for nonlinear optics and why experimental observation of NLO phenomena did not occur until the laser was invented. Furthermore, dipoles can no longer reproduce the same frequency as the incident optical field. It is like music being played through an amplifier that cannot reliably reproduce the sound but instead distorts it. Thus, the distorted, re-radiated field contains additional frequencies compared to the original field. The nonlinear dependence of the material on the incident optical field results in a single frequency being converted into new frequencies. 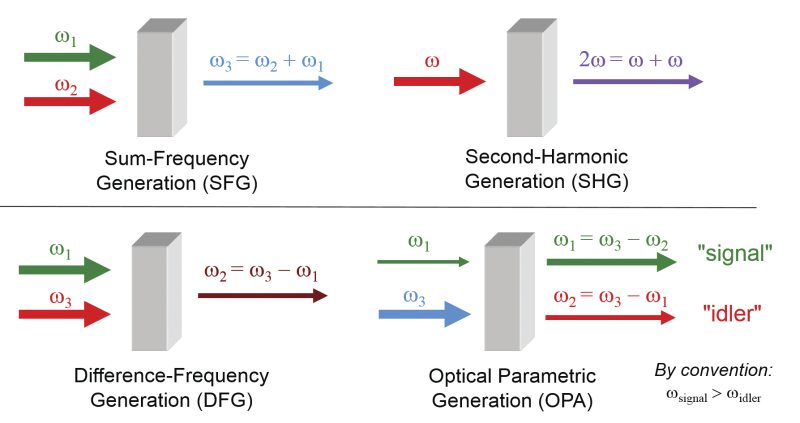 Figure 3. Three-wave mixing processes that allow for nonlinear frequency conversion. The colors of the frequencies generally describe their relative spectral positions, i.e., purple > blue > green > red > dark red, while the width of the arrows denotes the relative intensity of the beams.

For the case where the polarization is quadratically dependent on the field, these phenomena are known as second-order NLO effects. It is important to note that the two incident optical fields can be from the same laser source and thus possess the same frequency. However, in general, the two fields (sometimes referred to as waves) have different frequencies and, when they interact within the nonlinear medium, they produce a field with a new frequency. This process, known as three-wave mixing (depicted in Figure 3), can take on a variety of forms depending on the input frequencies and the desired output frequency. The upper row of Figure 3 shows the process of sum-frequency generation (SFG) where the input frequencies are added to produce higher frequency (shorter wavelength) light. Second harmonic generation (SHG) is a specific type of SFG that is commonly used since it allows for frequency-doubling of a single laser beam. By contrast, the lower row of Figure 3 shows difference frequency generation (DFG) where smaller frequency (longer wavelength) light is produced. Optical parametric amplification (OPA), a type of DFG, uses a pump beam to produce two waves of lower frequency that can span a wide spectral range. If the nonlinear medium that produces OPA is placed within a cavity, an optical parametric oscillator (OPO) can be formed, which effectively becomes an optically-pumped tunable source.

Once the conservation of energy condition is met (as shown by the frequency equations in Figure 3), a "phase-matching" condition must also be met to ensure efficient three-wave mixing. Phase-matching requires that the indices of refraction at the frequencies of the various waves be equal. This allows the three waves to be temporally and spatially overlapped over a long interaction length. An example of phase-matching is shown in Figure 4 for SHG. Due to dispersion, i.e., change in the refractive index with frequency, and the differences in frequencies of the waves, phase-matching cannot be achieved in a material with a single refractive index (see Figure 4, left). However, this can be accomplished by using a birefringent material, that is, a material that has different refractive indices for different input polarizations (see Figure 4, right). The polarizations for the waves must be orthogonal to one another and are referred to as the “ordinary” or o-wave and the “extraordinary” or e-wave, depending on the properties of the birefringent material. Birefringence naturally occur in certain crystalline materials and so NLO materials for three-wave mixing are typically crystals. The optimal phase-matching condition in an NLO crystal can be determined for a specific set of frequencies and polarizations. Wavelength (or frequency) tuning is then accomplished by either changing the orientation of the crystal through rotation or sometimes by adjusting its temperature in order to vary the index of refraction.

Figure 4. Dispersion and associated phase-matching conditions for a non-birefringent material (left) versus a birefringent crystal (right). The subscripts refer to the o-wave and e-wave.

In addition to the phase-matching considerations for an NLO crystal, the efficiency of the nonlinear frequency conversion depends on the NLO coefficient of the material similar to the role the transition cross-section plays in the efficiency of a laser gain material. In addition to a large NLO coefficient, other characteristics such as laser damage threshold, chemical stability, and optical quality and transparency play a critical role in the choice of the optimal NLO material. Some commonly-used crystalline materials for nonlinear frequency conversion are lithium niobate (LiNbO3), potassium titanyl phosphate (KTP), potassium dihydrogen phosphate (KDP), beta-barium borate (BBO), and lithium triborate (LBO). Achieving the litany of requirements for nonlinear frequency conversion can be challenging. This challenge includes material constraints of the NLO crystal, optimal phase-matching conditions, and large pump laser intensities. However, the capability for extremely wide spectral tunability when implementing nonlinear frequency conversion has made this approach attractive. Figure 5 shows an example where the proper choice of NLO crystals can enable wavelength-tuning that spans from the UV to the MIR with a single pump wavelength of 800 nm from a commercially-available amplified fs laser. 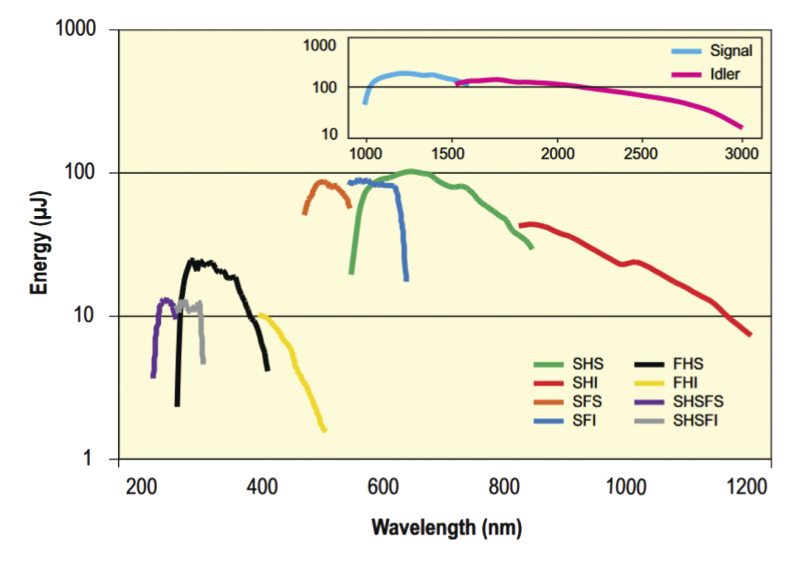