As detailed in Characteristics of Laser Output, lasers are distinguished from other light sources because lasers exhibit a high degree of collimation and have large optical intensities. Not only can these intensities remain large after long propagation distances, focusing elements can be used to drastically increase these intensities. While these unique attributes enable the myriad of laser-based applications, they also render laser radiation potentially hazardous to users. Such hazards come in the form of potential biological damage to the eye or skin, so laser safety is a critical aspect of laser usage. In this section, the classification of lasers based on their level of safety hazard is discussed along with general practices for maintaining laser safety. In addition, aspects of laser-induced damage to components within a laser system or an optical layout are also addressed.

In order to give some guidance on proper handling and required safety precautions, lasers or laser systems are assigned to specific hazard classes. Classification is based on the ability of the laser beam to cause biological damage to the eye or skin during use. Hazard level is determined based on exposure limits for the eye and must consider a variety of factors, including the distance of the user from the laser output, exposure duration, and possible use of optical instruments for viewing that could focus the radiation, e.g., binoculars, telescopes, microscopes. Furthermore, assignment to a laser safety class depends not only on the laser parameters, e.g., average or peak power, spatial beam size, lasing wavelength, but also on the accessibility of the hazardous area e.g., a high-power laser may be low-risk if the radiation is fully enclosed in a housing. The International Electrotechnical Commission (IEC) has published an internationally-accepted standard that outlines the safety of laser products (document 60825-1) and the American National Standards Institute (ANSI) has published a similar document  (Z-136.1) that is primarily used in the United States. There are differences between the two laser standards/classifications but the general descriptions are similar. Table 1 describes these safety hazard classes along with some representative laser systems. 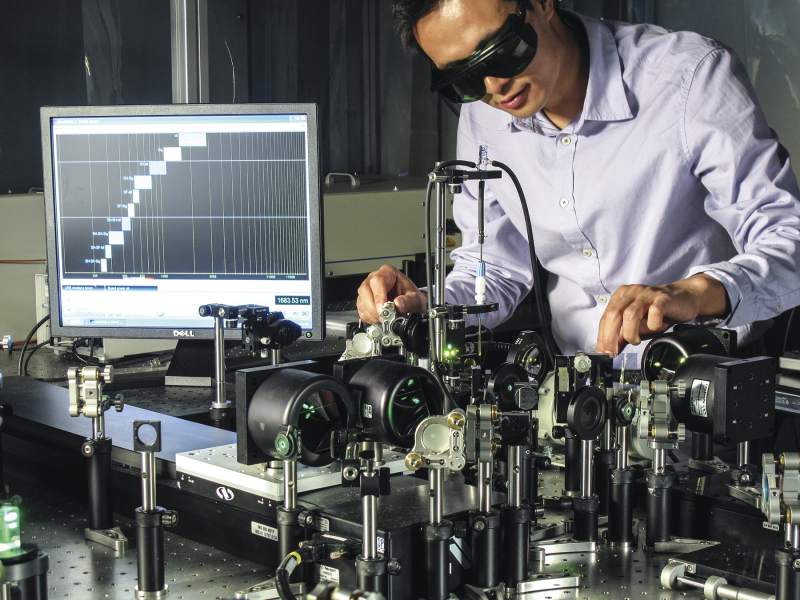 Safety hazards related to laser usage are generally separated into radiation hazards (associated with interaction with the laser beam itself) and electrical hazards (those associated with the electronic equipment used to operate the laser). Since radiation hazards are unique to laser operation, those will be discussed here. While high-power lasers do have the capability of inflicting burns on the skin, the eye is the part of the body most vulnerable to radiation hazards. Eye injuries generally have more dire consequences, e.g., partial loss of vision, and can occur at lower laser powers. These low thresholds exist because the lens of the eye can focus collimated laser light to a tiny spot on the retina leading to much higher intensities than experienced at the pupil. To quantify how much exposure to laser light is hazardous, maximum permissible exposure (MPE) limits are tabulated in terms of the allowable exposure time for a given intensity. The MPE is dependent on the specific laser characteristics, e.g., wavelength, power, beam size, repetition rate, as well as the spectral transmission of the eye itself.

Table 2. Control measures for Class 3b and Class 4 lasers.

The potential hazards associated with laser usage coupled with the ubiquity of laser applications require that laser safety control measures must be implemented in workplace and educational environments. These control measures are summarized in Table 2. Engineering controls are specifically designed to restrict or reduce exposure to laser radiation. Obviously one should never look directly into a laser light source or at scattered laser light from any reflective surface, but misalignments leading to accidental reflections can and do occur during normal operation. Such controls include ensuring that the laser and associated optical components are situated below eye level, proper enclosures are provided for the beam, all unused beams are properly terminated with beam dumps or stops, and that laser interlocks are utilized. Procedural controls help guarantee that personnel involved with the use of hazardous laser systems are properly trained and familiar with safety protocols. Finally, the use of personal protection equipment (PPE) is critical since it functions as the final safeguard against injury. Proper clothing and gloves can ensure minimal skin exposure to laser radiation but protective eyewear or laser safety glasses or goggles are the most important type of PPE. Laser goggles should have the appropriate attenuation factor, e.g., transmission reduction, to ensure that the MPE is never exceeded given the maximum output power of the laser being used.

The large intensities associated with laser output can lead to laser-induced damage of optical components. These can include components within a laser cavity itself, e.g., laser rod, resonator mirrors, modulators, the NLO crystals used for frequency conversion, any of the optical components that are used in optical systems, or power and energy sensors. Optical damage can occur within the bulk of the material or at its surface but is more likely at the surface since there is a higher density of microscopic defects which can intensify the incident optical field. Optical components can also have anti-reflection coatings on them and so surface damage will often initiate here rather than at the surface of the bulk material. In any event, it is important to know the laser-induced damage threshold (LIDT) of a component since it can limit the overall operation of an optical system. The physical mechanisms that lead to laser-induced damage can be quite complicated and have dependencies on pulse duration and laser wavelength. Therefore, LIDT values are typically determined experimentally by evaluating the extent of damage induced at various intensity levels. The LIDT value for a material or component is defined at a specific wavelength or for a range of wavelengths. For CW lasers, this value is often given as a power density or intensity (in units of W/cm2), whereas for pulsed lasers the value is usually given as an energy density or fluence (in units of J/cm2).