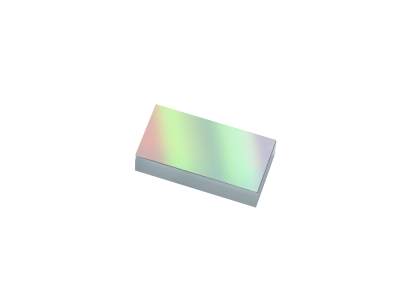 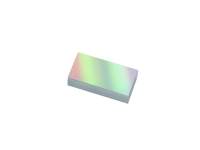 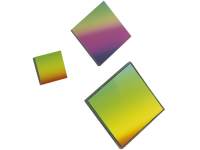 The 33066FL01-510H Plane Holographic Reflection Grating has 3600 grooves per millimeter and a nominal blaze wavelength at 200 nm. It has a recommended spectral region of 130 to 500 nm. This 12.5 x 25 mm grating is aluminum coated on a 6 mm thick float glass substrate. Newport Richardson Gratings' holographic gratings provide excellent wavefront flatness and high efficiency.

Holographic diffraction gratings typically have a sinusoidal surface profile generated optically by recording an interference pattern onto a photoresist-coated substrate. The photoresist is then coated with a vacuum deposited metal layer to produce a master grating, which may be used as a mold to produce replicated gratings. The final product typically consists of a substrate, a resin bonding layer, a patterned metal reflective layer, and a protective over coating. Holographic blazed gratings are generated by bombarding a holographically produced master with an angled beam of ions to etch the sinusoidal surface profile into a symmetric triangular profile. Holographic gratings are ideal for use in spectroscopy systems requiring very high resolution.

Holographic diffraction gratings can have very high diffraction efficiency, even above that of flat aluminum reflectors, at the design wavelengths and orientation. Diffraction efficiency is highly dependent on polarization state. Planar holographic gratings typically feature narrower spectral bandwidth, and have their peak efficiency at a shorter wavelength for P-polarization compared to S-polarization. For laser cavity applications this property may be used to feed back light from a specifically chosen wavelength and polarization state back into the laser gain medium to control the output of the laser. Conversely, applications such as spectrometers designed to operate using unpolarized light may require the use two gratings in conjunction with a polarizing beamsplitter to obtain optimum results.

Like their ruled counterparts, holographic gratings are most efficient when used in the Littrow configuration, or aligned so that the diffraction angle of the dominant diffraction order is coincident with the input beam, effectively behaving as a retroreflector at a specific wavelength. This geometry is especially useful for applications using a diffraction grating inside a laser cavity to select a particular wavelength. Only the exact chosen wavelength will reflect into the laser cavity. Holographic gratings are particularly useful because they have peak efficiency only at a particular polarization, allowing them to be used as a substitute for a Brewster window to control the laser output polarization.

Pairs of identical diffraction gratings that are tuned to the polarization and output wavelengths of a laser may be used to temporally compress ultrafast laser pulses, greatly increasing the peak power. When a spectrally broad laser pulse is incident on a diffraction grating, the various wavelength components will disperse, or diffract in different directions. If this pulse has its wavelength chirped (i.e. its frequency progressively increases during the length of the pulse) the first grating will diffract the leading portion of the pulse (consisting of longer wavelengths) at a greater angle compared to the trailing portion of the pulse (consisting of shorter wavelengths). When the light reaches the second grating with same periodicity the dispersion will be reversed from symmetry and the light will be collimated. Light from the leading edge of the pulse will travel a longer optical path through the pair of gratings, requiring more travel time. If the separation between the gratings is chosen so that the travel time difference matches the pulse duration, the laser power will be compressed into a nearly instantaneous pulse.