Diffraction gratings are used to disperse light; that is to spatially separate light of different wavelengths. They have replaced prisms in most fields of spectral analysis.

The manufacture of diffraction gratings dates back to the late 18th century, however extensive use was limited by the difficulties in ruling gratings of adequate quality until Henry Rowland built ruling engines in the latter part of the 19th century. Subsequent production of high quality gratings led to significant advances in analytical spectroscopy. Today, most diffraction gratings are replicated from masters. Masters can be ruled with interferometric control, generated holographically with possible enhancement through ion etching, or made with newer techniques derived from semiconductor lithography. 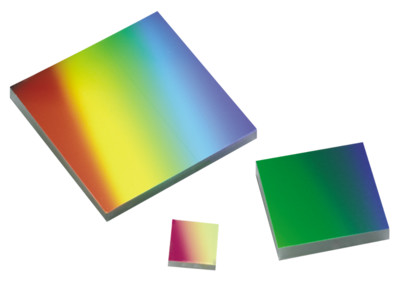 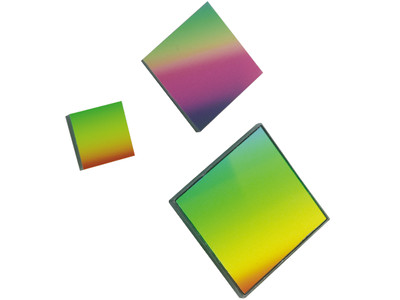 A typical diffraction grating consists of a substrate, usually of an “optical material”, with a large number of parallel grooves ruled or replicated in its surface and overcoated with a reflecting material such as aluminum. The quality and spacing of the grooves are crucial to the performance of the grating, but the basic grating equation may be derived by supposing a section through the grating surface, normal to the ruling direction as a sawtooth pattern, shown below in Figure 1.

Figure 1: The sawtooth pattern of a grating section.

Light rays A and B, of wavelength λ, incident on adjacent grooves at angle I to the grating normal are shown. Consider light at angle D to the grating normal; this light originates from the A and B rays as they strike the grating. The path difference between the A1 and B1 rays can be seen to be:
a sin I + a sin D
Summing of the rays A1 and B1 results in constructive interference if the path difference is equal to any integer multiple of the wavelength λ:
a(sin l+ sin D) = mλ

Where:
m = an integer, and is the order of diffraction

This is the basic grating equation. Note that if D is on the opposite side of the grating normal from I, it is of the opposite sign. We have considered only two grooves. Including all the other grooves does not change the basic equation but sharpens the peak in the plot of diffracted intensity against angle D.

The Diffraction Grating Equation in Practice

When a parallel beam of monochromatic light is incident on a grating, the light is diffracted from the grating in directions corresponding to m = -2, -1, 0, 1, 2, 3, etc. This is shown i. Figure 2, and discussed further under “Grating Order”.

When a parallel beam of polychromatic light is incident on a grating then the light is dispersed so that each wavelength satisfies the diffraction grating equation. This is shown in Figure 3.

Figure 2: The “Grating Equation” satisfied for a parallel beam of monochromatic light.

Figure 3: Polychromatic light diffracted from a grating. Positive orders have been omitted for clarity.

In most monochromators, the input slit and collimating mirror fix the direction of the input beam that strikes the grating. The focusing mirror and exit slit fix the output direction. Only wavelengths that satisfy the grating equation pass through the exit slit. The remainder of the light is scattered and absorbed inside the monochromator. As the grating is rotated, the angles I and D change, although the difference between them remains constant and is fixed by the geometry of the monochromator. A more convenient form of the grating equation for use with monochromators is:
mλ = 2 x . x cos φ x sin θ
Where:
φ = Half the included angle between the incident ray and the diffracted ray at the grating
θ = Grating angle relative to the zero order position

These terms are related to the incident angle I and diffracted angle D by:
I = θ + φ and D = θ - φ 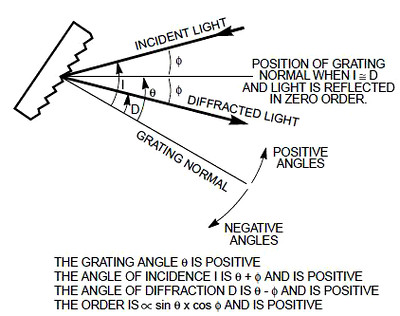 Figure 4: The sign convention for the angle of incidence, angle of diffraction and grating angle.

Usually only the first order, positive or negative, is desired. The other wavelengths in higher orders may need to be blocked. The input spectrum and detector sensitivity determine whether order sorting or blocking filters are needed.

If monochromatic light strikes a grating then a fraction of it is diffracted into each order. The fraction diffracted into any order can be termed the efficiency of the grating in that order. All Oriel Gratings are designed for efficient diffraction into the first order. Gratings are not equally “efficient” at all wavelengths for a variety of detailed reasons. The efficiency can be “tuned” by changing the groove facet angles, or shape and depth. The optimization of efficiency by appropriate groove shaping has become known as blazing. The “Blaze Wavelength” is the wavelength for which the blazed grating is most efficient. Figure 5 shows a typical efficiency vs. wavelength curve for a ruled and a blazed holographic grating.

Figure 5: The efficiency of a ruled and a blazed holographic grating, both have 1200 l/mm.

Holographic gratings are created using a sinusoidal interferometric pattern and sometimes an etching process. Sinusoidally grooved gratings produce very little scattered light but have low, flat efficiency curves, although they are generally quite broad. Blazed holographic gratings use etching during the interferometric process, or an ion gun to form a blaze angle in a secondary process. The former does not produce strong blazing, and while the latter produces high efficiencies at the blaze wavelengths, light scatter is increased due to the formation of micro structure along the edges of the grooves. Newport offers both ruled and holographic gratings to provide the best combination of blaze, efficiency, and low light scatter for different wavelength ranges.

Table 1 Half Angles and Orders for Oriel Monochromators

If we fix the angle I in the grating equation and differentiate with respect to wavelength we get:
a x cos D x δD = m x δλ
. thus:

For our 77250 Monochromator and MS257 Monochromator. and Spectrograph each with 1200 l/mm gratings, the linear dispersion is:

Normally, we use the “reciprocal linear dispersion”, which gives the wavelength dispersion in nm/mm of slit width.

The bandpass is the width of the spectrum passed by a monochromator or spectrograph when illuminated by a light source with a continuous spectrum.

In a monochromator, the bandpass may be decreased by reducing the width of the slits until a limiting bandpass is reached. The limiting bandpass is called the resolution of the instrument. In spectral analysis, the resolution is a measure of the ability of the instrument to separate two spectral lines that are close together. The resolution of the 77250 is about 0.5 nm and that of the 77700 is 0.1 nm with 1200 l/mm gratings in the visible. For a properly illuminated grating, see below, the aberrations of the optical system determine the resolution. For any instrument, the optical aberrations are minimized by illuminating only the central zone of the input slit.

For large bandpasses, compared with the resolution, the bandpass is given by the product of the reciprocal linear dispersion and the slit width.

The resolving power R of a grating is defined in terms of wavelengths λ and λ + δλ, where λ + δλ is the closest wavelength to λ that can be resolved. Theoretically:

Where:
δλ = Resolution
W = Illuminated width of the grating.

Normally the smallest slit available and optical aberrations, rather than the grating, determine the attainable resolution. For the 77700 at λ = 500 nm, with a 1200 l/mm grating R is 60000 with a fully illuminated grating. Based on this, δλ is 0.008 nm. With 25 µm slits the product of slitwidth and reciprocal linear dispersion is 0.09 nm, which is close to the measured value of 0.1 nm and R = 5000 instead of 60000. If however, only a few mm of the grating are illuminated, as is sometimes the case with laser sources incorrectly coupled to the monochromator, the grating resolution can broaden the measured bandwidths. For example, if a laser illuminates only 2 mm of the grating width, the measured bandwidth will be 0.2 nm, even for a very narrowband laser.

Very short pulse (ps) lasers will only illuminate a small portion of the grating at any instant. The resolution is degraded in agreement with Heisenberg's Uncertainty Principle.

The exit beam from a typical monochromator should be monochromatic but usually contains undesired light of other wavelengths. Filters can be used to block higher order diffracted wavelengths. Other unwanted light, called stray light, has several origins and should be minimized. Usually, part of this unwanted light, called re-entrant spectra, is due to diffracted light being directed onto the entrance, collimating or focusing mirror, and back towards the grating. Light can also be reflected off a focal plane detector such as a diode array back into a spectrograph and similarly cause re-entrant spectra. The Ebert-Fastie Out of Plane design used in the 77250 Monochromator has no re-entrant spectra, neither does the 77700 Monochromator. Re-entrant spectra are absorbed on baffles and by tilting the detector in the 77400 Spectrograph. For a major improvement in signal/stray light ratio, use a double monochromator.