A conventional lamp-based tunable light source produces monochromatic light with wavelengths that range from the UV to the NIR. Tunable light sources (TLS) find use in applications requiring coordinated operation of a light source and a detection instrument with data acquisition and processing. The TLS is versatile, being both a broadband and high-resolution monochromatic light source which makes it suitable for applications such as the study of wavelength-dependent chemical or biological properties and wavelength-induced physical changes in materials. These light sources can also be used in color analysis and to measure the reflectivity of materials for quality purposes. The key components of a lamp-based TLS are a highly stable incoherent light source and a monochromator. Arc lamps and QTH lamps are commonly used in a TLS.

This section describes different TLS systems including their performance specifications and targeted applications.

Arc lamps are excellent sources of CW, broadband light (see Incoherent Light Source Physics for details). They consist of two electrodes (an anode and a cathode) separated by a gas such as neon, argon, mercury, or xenon. Light is generated by ionizing the gas between the electrodes. The bright emission from the short arc between the anode and cathode means that these lamps can be considered as high intensity point sources of light that can be collimated using the proper lens configuration. Arc lamps offer the advantages of long lifetime, superior monochromatic throughput (particularly in the UV range), and a small divergence angle. They are particularly well-suited for fiber coupling applications. Xe arc lamps, in particular, have a relatively smooth emission curve in the UV to VIS spectral region, with characteristic wavelengths emitted from 750-1000 nm. Their sun-like emission spectrum and ~5800 K color temperature make them a popular choice for solar simulation applications. 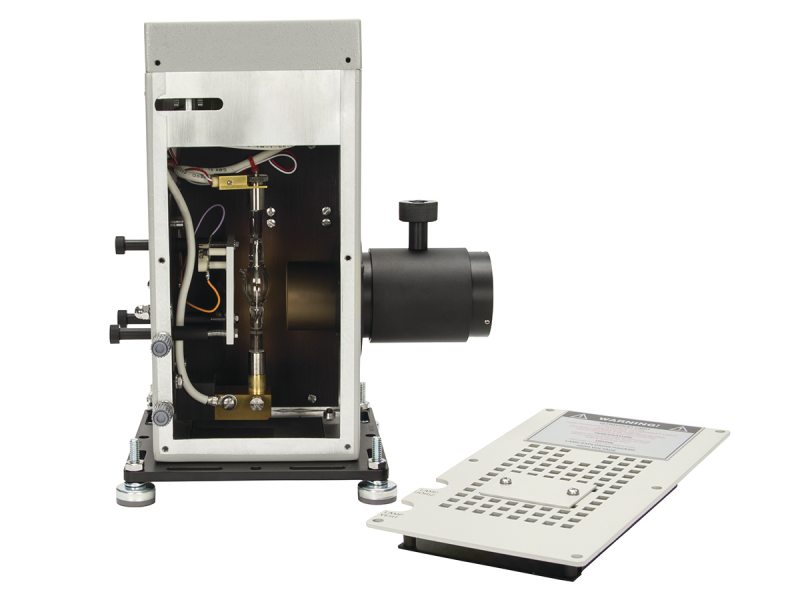 Figure 1. Lamp housing with arc lamp.
QTH lamps produce light by heating a filament wire with an electric current. The hot filament wire is surrounded by a vacuum or inert gas to prevent oxidation. QTH lamps produce continuous blackbody spectrum and exhibit very accurate color reproduction. They are a popular alternative to arc lamps owing to their stable, high output intensity and to the smooth spectral emission lines in their output curve (Figure 2). QTH lamps are preferable for radiometric and photometric applications and as excitation sources of VIS to NIR light. QTH lamps are also easier to handle and install. Selecting the most appropriate lamp type is a matter of deciding which performance criteria are most important when assembling a TLS.

Monochromators (Figure 3) use diffraction gratings to spatially isolate and select a narrow band of wavelengths from broadband radiation. They can be used to create quasi-monochromatic light and to obtain highly precise spectral measurements. A high precision stepper motor is typically employed to select the desired wavelength and to quickly switch between diffraction gratings without reducing an instrument's performance.

A TLS provides an ideal light source for the measurement of device quantum efficiency (QE) over different wavelengths. QE measurements determine the ratio of charge carriers (electrons or holes) generated in a material to the number of photons impinging on its surface. In practice, this is done by subjecting a solar cell to a known flux of light from a calibrated TLS while simultaneously measuring its output electrical current. External quantum efficiency (EQE) is the ratio of the number of photons incident on a solar cell to the number of charge carriers generated. Internal quantum efficiency (IQE) is more complex in that it considers the internal efficiency - that is, the losses associated with the photons absorbed by non-active layers of the cell. EQE provides a direct measure of how much output current will be generated per incident photon at a given wavelength, while IQE includes the losses from non-active layers of the material to calculate a net QE - a much truer efficiency measurement. (Quantitatively, IQE = EQE/(1 - R), where R is the reflectivity of the solar cell.) The IQE is an indication of the capacity of the active layers of the solar cell to make good use of the absorbed photons. It is always higher than the EQE, but should never exceed 100%, except in the case of multiple-exciton carrier generation. Accurate QE measurement requires exact, quantitative knowledge of the light flux incident on the DUT and of the current generated by that light flux. The TLS output must always be calibrated using a detector having NIST-traceable calibration to ensure accurate knowledge of the incident light flux in QE measurements; the current should be similarly measured with equipment calibrated to known standards. QE measurements provide critical understanding of the conversion efficiency as a function of wavelength in materials research and solar cell design. With this data, solar cell composition and topography can be modified to optimize conversion over the broadest possible range of wavelengths.

Figure 4. QE measurement system layout.
Arc lamp sources are generally the better choice for QE measurements made with 5 nm or lower wavelength increments since the arc size produces better monochromator throughput. Conversely, a QTH lamp is the better choice if greater than 0.1% light stability is required. However, a QTH lamp cannot achieve wavelength increments as precise as an arc lamp. Balance between the optical power and the resolution in a QE measurement is important since it strongly impacts the quality of the measurement. This makes the selection of lamp type and monochromator specifications an extremely important consideration for TLS design. To be considered a suitable component for most spectroscopic applications, high-output power and stability, long lifetime of the lamp, and broadband spectral emission with high-resolution capability are required in a TLS.