New Focus modulators are truly user-friendly: simply point the beam through the mechanical apertures. The apertures coincide with the optical axis so that the beam propagates through a region where the electric field is very uniform. You get minimal beam-shape distortion and low residual amplitude modulation (RAM). (Etalons in the crystal make it impossible to completely eliminate RAM.) With careful adjustment of the beam’s alignment and polarization, our modulators exhibit less than –60 dB of RAM for a 1-radian peak phase shift.

To align the modulator, we suggest using the Models 9071 or 8071 four-axis tilt aligner. In order to minimize clipping through the modulator, a good rule of thumb is that the beam diameter should be less than one-third the aperture size. Larger beams can be focused into the modulator and then collimated afterwards using a pair of lenses. If you do this, make sure the intensity inside the modulator doesn’t exceed the damage threshold.

The electro-optic crystals used in our modulators are susceptible to optical damage through the photorefractive effect. This phenomenon is caused by photoexcited charge carriers migrating from illuminated regions to darker regions. The localized refractive-index variations resulting from this field and the electro-optic effect reduce the modulator’s effectiveness and cause beam distortions.

If your modulator becomes damaged, it may be possible to at least partially reverse the damage by carefully annealing the crystal and thus mobilizing the charge carriers. Because of the sensitive parts contained inside the modulator housing, this should be done only at New Focus. Please contact us for details.

To drive a broadband modulator, use the Model 3211 broadband-modulator driver which has a bandwidth up to 600 kHz.

New Focus can help you find the driver that’s right for your specific application. Contact us for help selecting a driver. 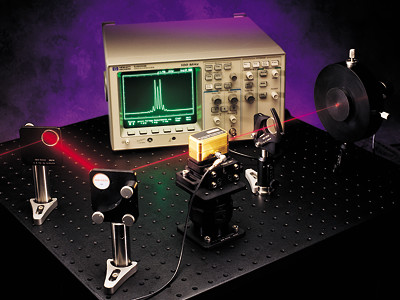 A typical setup for observing phase modulation: a HeNe laser beam is sent through a Model 4001 resonant phase modulator operating at 29 MHz, and the beam is focused into an optical spectrum analyzer. The laser’s phase-modulated spectrum, with its characteristic frequency sidebands, is observed on an oscilloscope.