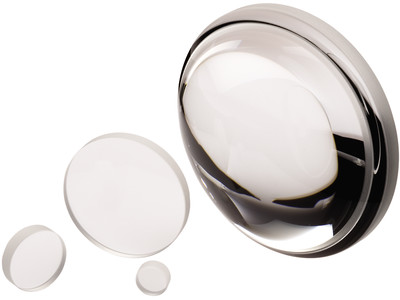 Surface quality and surface irregularity need to be clearly defined in order to meet the damage threshold, wavefront and low-scatter requirements. Surface quality describes the level of imperfections that can be visually noted on the surface of an optical component. These imperfections consist of scratches, dig (little pits), sleeks (tiny scratches), bubbles, edge chips, and coating blemishes. In some cases these defects are small and do not affect system performance, thus are generally called “cosmetic surface quality” or “beauty specifications”. They also indicate the level of workmanship in the part and even if the performance is not affected, these defects dramatically affect customer satisfaction.

In some cases for the more demanding applications, these defects might result in light scattering, undesired diffraction patterns, loss of contrast and stray light, which degrade the system performance and might even damage the optics. For example, when the surface is located at the image plane, the defects would show up directly and degrade the overall image quality. Defects on surfaces that are exposed to high-energy laser radiation can absorb light and eventually destroy the optics. On the other hand, over-specifying cosmetic surface quality can increase product cost. The customer should be aware of the appropriate level of surface quality suitable to their intended applications. The specification of surface imperfections is complex. The most common and widely accepted industry standard for specifying surface quality is the U.S Military Surface Quality Specification, MIL-PRF-13830B. All Newport optics are tested in accordance with this specification.

Surface accuracy is the measurement of the deviation between the actual shape and its intended shape of an optical surface. It is important to specify the expected surface accuracy to prevent extra wavefront distortions, which result in aberrations and degrade the system performance. Aberrated wavefront leads to poor Strehl ratio (the ratio of the observed peak intensity at the image plane to the theoretical maximum peak intensity of an ideal optical system). Surface accuracy can be measured using either test plate or interferometers.

In the test plate method, placing the test plate and the surface under test into close contact creates circular interference fringes, known as Newton’s Rings. Counting the quantity and examining the irregularity of these fringes indicates the surface accuracy of the surface under test relative to the test plate. The number of rings indicates the difference in radius between the two surfaces, which is known as power. The separation between each fringe of the same color (dark or bright) represents a height difference of half a wavelength of the light used. The rings might exhibit distortions, indicating non-uniformity on the surface. The distortion might be local in a small area, or it might be in the form of non-circular fringes across the entire aperture. All such non-uniformities are considered as irregularity.

The accuracy of a test plate is only as good as the means used to measure its radius of curvature. Test plate can be either flat or spherical as long as its optical quality is within small fractions of a fringe. Extra caution is required when handling the test plate to prevent damage to the reference surface on the plate. The disadvantage of using a test plate is the tendency to scratch or damage the test plates as well as the sampling surfaces due to direct contact from both surfaces. Also, to ensure the resulting interferogram has a sufficiently small number of fringes to be analyzed, the two surfaces must have nearly the same radius of curvature. Thus the tests performed by an optical shop are based on the availability of different test plates in their possession, limiting the capability to test all optical surfaces.

Utilizing interferometers (such as Fizeau or Twyman-green) with advanced computer data analysis software allows industries to have considerably more accurate measurements. This approach also prevents direct contact between the reference plate and the sample surface. This approach doesn’t have the same restriction as to the test plates since it can analyze any size of optics. The disadvantage of this approach is the cost is much higher compared to the test plate method.

On an optical surface, only the highest point and lowest point on the surface relative to the reference surface are used. Since PV value only compares two local points on the surface and ignores the surface of curvature of the optics, it is difficult to give an accurate representation of the surface profile. The advantage of the PV error is that it is relatively easy to be estimated visually from the interferogram; however, any artifacts on the surface can cause PV to be quite large even though the optics might perform well. Consequently, an optical system having a large PV error might actually perform better compared to a system having a smaller PV error. Unfortunately, this is still the most common unit in the industry.

The RMS is calculated using the standard deviation of the height (depth) of the test surface relative to the reference using all of the data points in the interferogram. Compared to the PV error, the RMS error can reflect the optical performance of the surface being measured much more accurately. Since most manufacturers specify their optics in terms of PV error, a short comparison between different values is listed in the following table

* Unless otherwise stated, surface irregularity for Newport lenses is peak-to-valley, per surface.

The imperfections are specified by the typical designation of “20-10”, “60-40”, or “80-50”. The first number indicates the maximum width allowance for a scratch measured in microns, and the second number is the maximum diameter for a dig in hundredths of a millimeter. Thus, 60-40 means the apparent width of the scratch is 60 microns and the diameter of permissible dig is 0.4 mm.

A dig is a small rough spot or pit on the polished or coated optical surface, originating from defect in the raw material or from the grinding process. Digs are defined by the actual diameters in a tenth of a micron, or in hundredth of a millimeter. The number of maximum digs shall be one per each 20 mm diameter on a single optical surface. The sum of the diameters of all digs shall not exceed twice the diameter of the maximum size specified per any 20 mm diameter. Digs less than 2.5 microns are generally ignored. For surfaces whose dig quality is 10 or less, digs must be separated by at least 1 millimeter.

Fractures which do not encroach on the clear aperture of the lens shall be allowable, given that the chips do not interfere with the sealing of the lens in the mount. Edge chips that extend into the clear aperture shall be considered digs. Chips that are larger than 0.5 mm shall be grounded to reduce the possibility of reflections and additional chipping. The sum of the widths of chips larger than 0.5 mm shall not exceed 30% of the lens perimeter. Fractures in any face or edge need to be ground out. The sum of grounded chips and fractures in the grounded areas can not exceed 2 % of the grounded area or should be rejected. Edge chips which do not encroach on the clear aperture of the prism shall be allowable as long as the sum of the chip widths does not exceed 30% of the length of edge on which the chips occur. Chips shall be measured from the beveling edge instead of the sharp edge. Chips less than 0.5 mm can be ignored and those larger than 0.5 mm need to be stoned or grounded.

Optical glass, in general, is nearly free of bubbles and inclusion compared to other technical glasses due to the sophisticated production process, which is optimized for low bubble content. Bubbles on the pupil plan do not disturb the shape of the final image but the image contrast and brightness are reduced due to part of the light scattered. If the inclusion appears on the image plane, then the defect will show up in the final image directly, and contaminate the final image.

The inclusion quality check is done by the visual inspection. The glass is placed on a black background and illuminated from the side. Any bubbles and inclusions become visible as bright spots when viewed from the top. Any inclusion in the glass, such as stones or crystals, shall be treated as a bubble and bubbles need to be classified as surface digs. The size for inclusions with irregular shape shall be considered as ½ the sum of the maximum length and the maximum width. The allowable number of maximum size bubbles shall be one per 20 mm of light path, or fraction thereof, of any single element. The characterization of bubble content of the glass is performed by reporting the total cross section in mm2 of a 100 cm3 glass volume, calculated as the sum of the detected cross sections of bubbles. The customer should always indicate if the bubble and inclusion specification is only valid for the fabricated piece of glass or for the raw piece