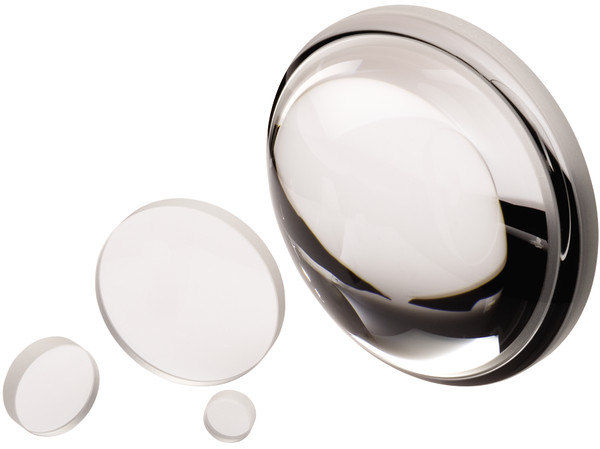 There are many things to consider before one can decide which material to use for the lenses in their applications. The most important material properties to take into consideration regarding a lens are:

Also known as the refractive index, is the ratio of the speed of light in vacuum to its speed in the medium as light propagates through the medium. The refractive index is a description of how much the light slows down when it passes through certain optical material. This value also determines the angle at which light is refracted when entering or leaving the substance. Index of refraction ranges from 1 for vacuum, to about 1.8 for most common used optical glass. The index of refraction for any glass material varies slightly at different wavelength of light, resulting in unequal propagation for each individual wavelength, causing chromatic aberration. Generally, glasses that have high-index of refraction have higher dispersion, resulting greater chromatic aberration. These glasses are called flint glass, and are normally paired with a crown glass (glass with low index of refraction) to produce an achromat, which is used to correct for chromatic aberration.

Dispersion describes the change of index of refraction with wavelength. Dispersion causes chromatic aberration in lenses, an undesired effect which degrade image quality. In the other hand, dispersion provides the separation of colors in prisms, which can be used to construct spectrometers. Generally the dispersion of a material is characterized by measuring the index at three wavelengths: nF at 486.1 nm (Hydrogen F line), nD at 589.3 nm (Yellow Sodium D line), and nC at 656.3 nm (Hydrogen C line). Dispersion is measured by a standard parameter known as the Abbe’s number (ν), which can be calculated using the following equation:

Typically low Abbe number indicates high dispersion. Crown glasses have low dispersion and the flint glasses have high dispersion. The Abbe-Diagram provided by Schott plot index of refraction versus Abbe number. By tradition, the Abbe number increases to the left, indicating that dispersion increases to the right. The glass line is the locus of ordinary optical glasses based on silicon dioxide. There is a major line at ν ≈ 50 to 55 separates the glasses into the two primary classifications: crown glass and flint glass. Glasses away from the glass line are softer and more difficult to polish.

Thermal expansion coefficient defines the amount an object changes relative to its surrounding temperature change. It measures the fractional change in volume per degree change in temperature under a constant pressure. This coefficient needs to be considered to prevent mounting difficulties when packaging the optics. This value should also be considered when the optical system needs to be used outdoors to ensure optimal system performance.

In optics, transmission is the property of a medium allowing light to pass through the medium with some or none of the incident light being absorbed during the process. Different glass materials have different transmission range, allowing light to pass at different wavelengths. The transmission curve should be used to estimate the attenuation of light at different wavelengths in a certain medium for any application. It is important to consider this value to ensure light can pass through your system over a specific wavelength range. Standard optical glasses offer high transmission throughout the entire visible spectrum and extend into the near ultraviolet and near infrared regions. Generally crown glasses have better transmission comparing to the flint glasses. Flint glass should always be specified with an Anti-Reflection coating due to its high index resulting in Fresnel reflection loss.

In order to achieve optimal system performance, the following mechanical properties should be taken into consideration : density, hardness, and elasticity. The density of the material defines the relative “heaviness” of the object with a constant volume, which can have an effect on the overall weight of the system. The hardness can have an effect when fabricating the material into certain shape, which affects the product cost, as well as the durability of the optics. The hardness of the material also determines the scratch resistance of the optics, allowing user to have a rough idea on treating these optics when operating or cleaning. The elasticity of the material indicates its ability to withstand high pressure differentials, such as windows used in vacuum chambers.

Most of the times, cost plays a major factor when selecting your optical components to design the system within the specified budget. For some materials the cost increases greatly with larger diameter due to the difficulty in obtaining large piece of the material to be manufactured. Better optical specifications require longer manufacture time, resulting higher total cost of the product as well