The function of a motion device, such as a stage, is to generate a desired motion in an ideal trajectory. Furthermore, the device must be able to reliably and repeatably reach a specified target position. Factors like friction between moving parts, quality of guides or bending induced by moving loads, often deviate the motion from this ideal trajectory or result in differences between the actual and target position. Details regarding the various factors that impact the motion of these devices and how to characterize their positioning precision and accuracy are the subjects of this section.

Any positioning stage is considered to have six degrees of freedom: three linear translational, along the x, y, and z-axes and three rotational about those same axes. The purpose of a stage is to produce motion along an ideal trajectory, which requires constraining motion to certain degrees of freedom. Any motion in non-constrained directions will contribute to deviation from the ideal trajectory and/or position. For instance, the function of a linear translation stage is to constrain motion along an ideal straight line. Runout of a linear stage is the linear (versus angular) portion of off-axis error and represents the departure from desired, ideal straight-line motion. Runout consists of two orthogonal components referred to as flatness and straightness. Figure 1 shows a linear stage whose ideal straight line motion is confined to the x-axis. In this case, flatness deviation is displacement along the z-axis while straightness deviation is displacement along the y-axis. Similarly, angular runout (or tilt) of a linear stage is the rotation of the moving functional point or the point where a measurement and/or process is occurring. It has three orthogonal components commonly referred to as pitch, roll, and yaw (see Figure 1) and can be a complex combination of the three components. Furthermore, if multiple stages are connected to one another to create a multi-axis system, cross-coupling can occur which means that a change in one axis can result in an unwanted change to another axis. 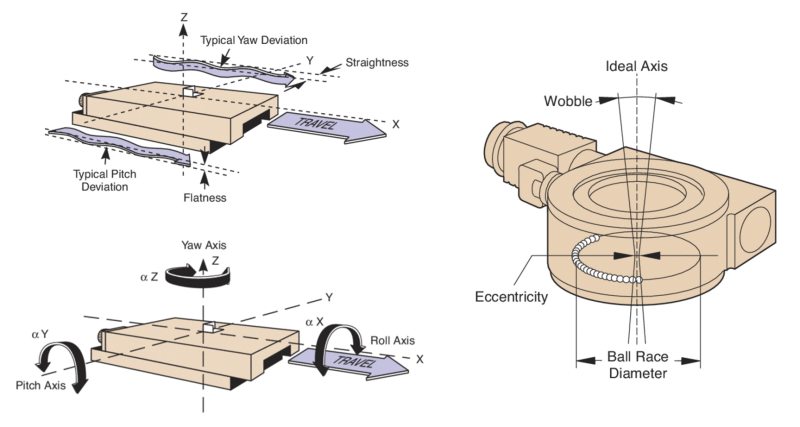 Figure 1. Flatness and straightness runout of a linear stage (upper left). Roll, pitch and yaw angular runout of a linear stage (lower left). Off-axis deviations in a rotary stage (right).
For a rotational stage, eccentricity is the radial (perpendicular to the axis of rotation) deviation of the center of rotation from its mean position as the stage rotates through one revolution (see Figure 1). It is also referred to as radial runout. A perfectly centered stage with perfect bearings would have no eccentricity. Wobble of a rotary stage is the tilt of the axis of rotation relative to the ideal axis over one revolution. It is most easily observed as a cyclic tilting of the rotating surface or table top of a stage. Like eccentricity, it is generally the result of imperfect bearings.

In addition to traveling an ideal trajectory, a stage should reliably reach and maintain a specified target position. Reversal error is the distance between the actual positions reached for a given target position, when approached from opposite directions (see Figure 2). This value is a combination of backlash and hysteresis. Backlash is the result of relative movement between interacting mechanical parts of a drive system that does not produce output motion. Contributing factors include clearance between mechanical parts such as gear teeth and mechanical deformation. Not all systems have backlash but, when they do, it mainly affects bi-directional repeatability (see below). Backlash can be compensated by motion controllers due to its repeatable nature. Hysteresis is a component of reversal error that is dependent on the recent history of the system. It is the result of elastic forces in the various components and is observed when the forces acting on a system reverse direction. Hysteresis affects both bi-directional repeatability and accuracy (see below). Unlike backlash, hysteresis is present in all mechanical systems although its value may be low. While reversal error relates to a stage's ability to reach the target position, position stability is the ability to maintain a position within a specified position range over a specified time interval. It is the sum of drift and vibrations. Drift is the slow deviation from a stable position. It mainly depends on the migration of lubricants and thermal variations. Vibrations are fast alternative motions of small amplitude generated by the environment, e.g. noise from the flow, air fans, and electronics, e.g. a motor driver. 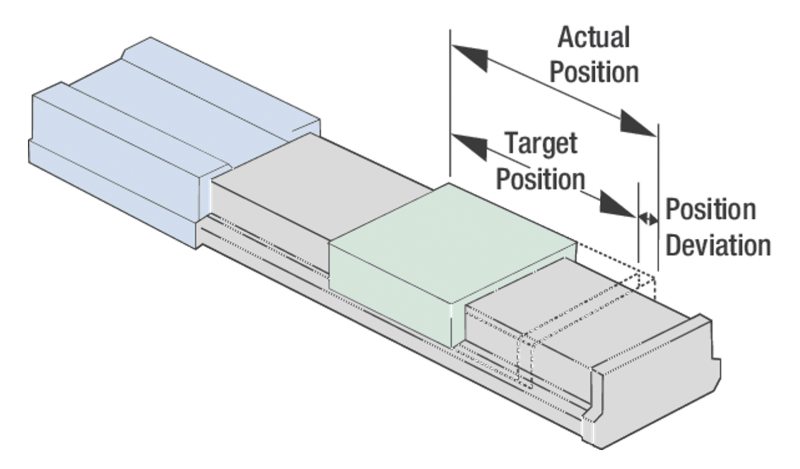 Figure 2. Illustration of a position deviation for a linear stage, which is the actual or measured position reached by the functional point minus the target position.
In addition to position, the rate of change of position, or speed, is an important factor in motion systems. The maximum speed specification is provided at the stage's normal load capacity (see below). Higher speeds are possible for lower loads or larger motor drivers. Minimum speeds are highly dependent on a motion system's speed stability. Speed stability is a measure of the ability of a motion system to maintain a constant speed within specified limits. It is usually specified as a percentage of the desired speed. Acceleration is the rate of change of speed, which is often set to achieve the maximum speed in a set amount of time. Friction can play a significant role in the speed, speed stability, and acceleration of a stage. Friction is defined as the resistance to motion between surfaces in contact. Elements contributing to friction may be in the form of drag, sliding friction, depleted lubrication, system wear, or lubricant viscosity. Stiction is the static friction that must be overcome to impart motion to a body at rest. Since static friction is generally greater than moving friction, the force which must be applied to impart motion is greater than the force required to keep the body in motion. As a result, when a force is initially applied, the body will begin to move with a "jump" that results in position and/or speed overshoot. 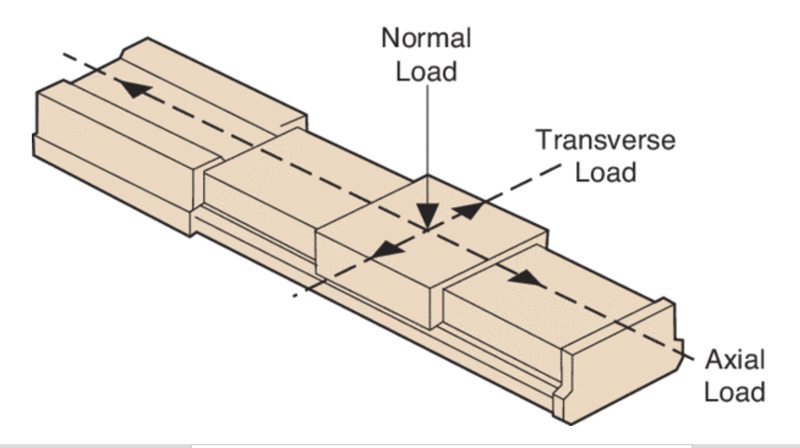 When selecting the appropriate positioner for an application, it is common to evaluate them with regard to the product specifications, in particular, repeatability and accuracy. Repeatability is often confused with accuracy but, as illustrated in Figure 4, a system may be very repeatable yet lack accuracy. Accuracy is a measure of the degree to which a given displacement conforms to an agreed upon standard. For instance, runout is also known as straight-line accuracy. The accuracy of a motion system can also be highly influenced by the test set up, environmental conditions, and the procedure used to measure displacement. With the majority of modern controllers, linear error compensation can be easily accomplished by entering a compensation factor into the controller. Therefore, accuracy after compensation is often specified for a particular stage.

Figure 4. A depiction of the differences between accuracy and repeatability.
Repeatability is a measure of the positioning system's ability to sequentially position. It can be unidirectional (when approaching the target position always from the same direction) or bidirectional (when approaching the target position from either direction). In a number of applications, the repeatability of a motion system is more important than the accuracy. Systematic errors can be taken into account and compensated, but the repeatability is the ultimate limit that is reached after all compensation. The general idea of repeatability is the measure of the ability of a system to achieve a commanded position over many attempts when approached from either the same or different directions (see Figure 5). Reversal error and position stability essentially determine a system's repeatability. Repeatability is essential to ensuring quality in many different areas. Without proper repeatability in a manufacturing environment, there can be no reliable process to assure that products are manufactured the same way and meet the same specifications all the time. 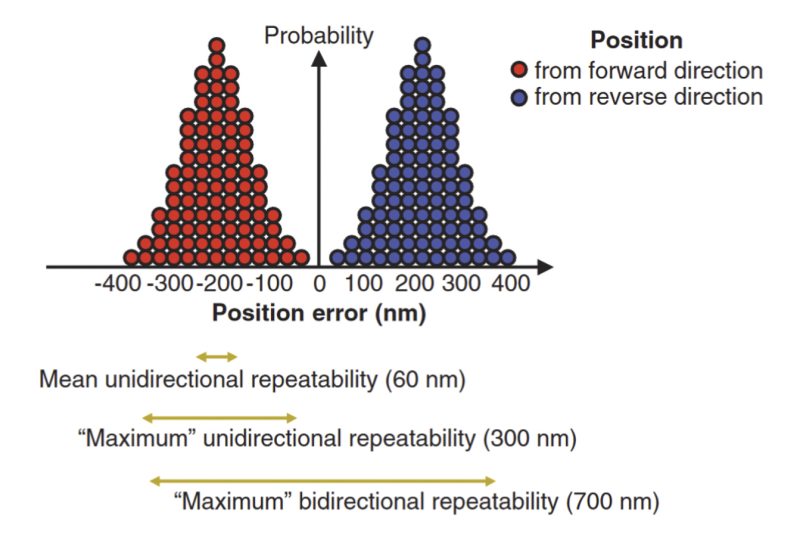 Figure 5. Measurements that yield a distribution of position errors define a motion control system's repeatability.
Resolution is the smallest increment that a motion system can be commanded to move and/or detect. A system may or may not be able to consistently make incremental moves equal to the resolution. Minimum incremental motion (MIM) is the smallest increment of motion a device is capable of consistently and reliably delivering. Factors that can affect this motion output include friction, load, external forces, system dynamics, controller, vibrations, and inertia. The MIM should not be confused with resolution, which is typically based on the smallest controller display value or smallest encoder increment. Resolution can be significantly smaller than the smallest actual motion output, a key distinction, but not always well understood. Sometimes MIM is referred to as "practical resolution".