The diameter of the mechanical aperture at the input and output of the modulator. The aperture aids optical alignment and ensures that the beam passes through the center of the crystal.

All modulators have female SMA input connectors. To convert to a BNC connector, use the Model 1225 adapter.

The input impedance seen by your electronic driver. The broadband devices are a capacitive load, and the resonant modulators are matched to 50 Ω.

The maximum optical intensity of a 1-mm-diameter beam that can be passed through the crystal without causing photorefractive damage. Note that this optical damage threshold is strongly wavelength dependent.

The maximum recommended RF drive power. Above this power, the electronic components will saturate or thermal effects in the crystal (such as thermal lensing) will become a problem.

The voltage required to achieve a Π phase shift at 1.06 µm. It is proportionately smaller at shorter wavelengths. The VΠ is much smaller for resonant devices because the resonant circuit provides significant voltage enhancement.

Modulators are equipped with a plastic base that can have either English (1/4-20) or metric (M6) threaded holes for mounting. To specify a metric version when ordering, add an “M” after the model number.

The range of electrical frequencies over which a modulator can operate. For resonant modulators, the specific resonant frequency can be chosen anywhere within this range when ordering the modulator.

The operating range of a particular device, otherwise known as the 3-dB frequency. It is the frequency range over which at least one-half of the electrical drive power will be transferred to the modulator. This is equivalent to the point at which the modulation depth has decreased by a factor of 2, since modulation is proportional to electrical field strength and not electromagnetic power.

Broadband modulators can operate from DC–100 kHz to 100–250 MHz. Resonant modulators operate at a single frequency and have much lower VΠ.

The voltage standing-wave ratio (VSWR) is defined as the ratio between the maximum and minimum voltages along a standing wave that results from electrical reflections due to an impedance mismatch. A VSWR value of 1 indicates a perfectly matched system. Since the VSWR is related to the reflection coefficient R by it tells you how much electrical power will be reflected back to

your driver. Excessive reflected RF power can damage your source. A VSWR of 1.5 corresponds to 4% of the incident RF power reflected back to the driver. 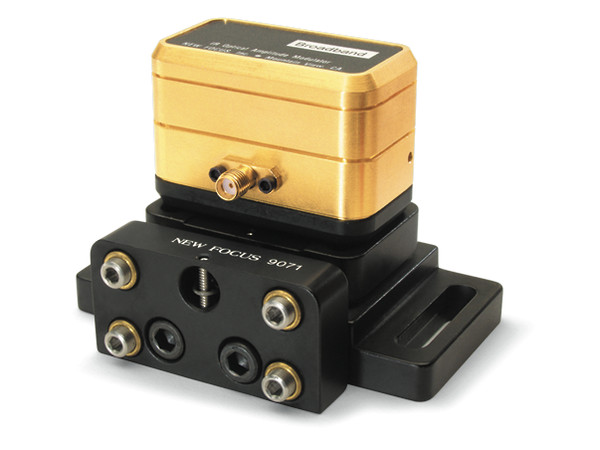 Aligning our modulators is easy with the Model 9071 four-axis tilt aligner.